December 5, 2013 by Jessica Gomez No Comments

The President of the Electoral Supreme Tribunal (TSE), David Matamoros, has reported that a Honduras election recount for the 2013 Honduras presidential election did not go forward as planned.

The “Free” (Libre – Libertad y Refundación) party candidate Xiomara Castro, who came in second in the election, had requested a recount of the votes from the November 24th general election, and despite the fact that the party was unable to produce any evidence of alleged irregularities, the TSE scheduled the recount process to commence on Wednesday. 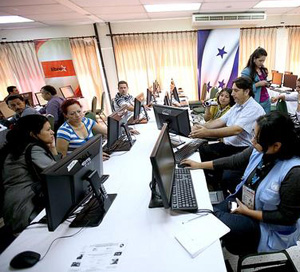 In order for the recount to take place, however, all parties are required to be present, and members of the Libre party did not show up to witness the event.

Libre representatives disagree that they missed an appointment scheduled by the TSE on Wednesday.  The Secretary of Electoral Affairs for Libre, Oscar Rivera, explained that Libre met on Tuesday with TSE management about the recount issue, but that there was no agreement as to the method that would be implemented to ensure the count was valid.  He said they expected to hear from the Court about what method was proposed to be used, but instead the TSE issued a statement where they asserted that an agreement had been reached amongst the parties to use a particular mechanism, which was not true.  The Libre party said they had received a proposal, and the same night, “gave a formal response to the Court in which we asked for some other mechanisms to ensure to the Honduran people that Honduran democracy is respected…”

The Libre party is insisting that a recount be scheduled, and that other options are be used for the verification of records.