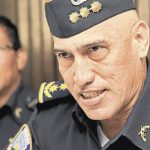 Director of the Honduras National Police the Tiger

In a period of 24 days, the National Police is headed by new faces, as part of the new Honduras being formed by National Police Director assigned to cleanup the police force throughout the country. For Juan Carlos Bonilla (The Tiger) “Tigre”, the changes announced for the National Police should be no shocker, despite the historic simultaneous appointment of 43 police chiefs, including directors, regional managers and department heads. The changes began in September of 2011 in the National Police, according to Bonilla, with the opportunity to “streamline and professionalize” the police service across the country.

He is also in charge of formalizing the metropolitan headquarters and making administrative changes.
“We’re not talking about a reshuffle, we are talking about an optimization of human resources of the National Police so that we can meet the peoples’ expectations of security.”

The audit process has begun around the police system, from logistics teams to human resources, to identifying problems and seeking solutions.

“We know that it should be the given a role of the National Police. This does not mean that those who preceded them in these positions did not make the effort, but now society has to say if the work is being carried out in the best way possible.”

Also announced were the new regional directors and department heads.
The National Commissioner of Human Rights, Ramón Custodio said that to meet the emergency in Honduras in the field of security, answers are needed and not absurd proposals.