Two Russian navy ships, together with forces from Nicaragua and Honduras, have taken part in anti-narcotics naval exercises in the Caribbean, a spokesman for Russia’s Northern Fleet said Tuesday. 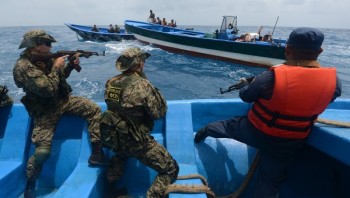 Russia sent a Vishnya-class intelligence ship, the Viktor Leonov, and the Nikolay Chiker support vessel to the exercises.

Russia has started reviving its navy and strategic aviation since the mid-2000s, seeing them as a tool to project Russia’s image abroad and to protect the country’s interests around the globe.

Moscow now needs to place such military assets in strategically important regions of the world to make them work effectively toward the goal of expanding Russia’s global influence.