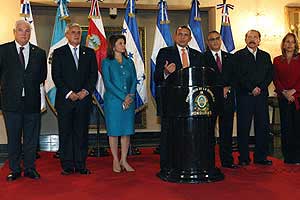 The Presidents that make up the System of Central American Integration (SICA) agreed on Tuesday to establish a common front against the menace of drug trafficking.

In the joint statement, read out by President Porfirio Lobo Sosa in the Morazán Hall of the Presidential Palace, the leaders of the region stressed the importance of strengthening the exchange of information between Central America and other countries.

Following is the the joint statement issued by the Presidents of SICA:

At the invitation of the President of Honduras, Porfirio Lobo Sosa, President Pro Tempore of the System of Central American Integration, SICA met in the city of Tegucigalpa on March 6, 2012.

Aware of the importance that our region has for the safety and welfare of our citizens, we continue our dialogue on the security strategy for Central America and its linkage with the economic and social development of our Nations.

We had the opportunity to establish an exchange with the Vice President of the United States of America, Joseph Biden, with whom we are examining the complexity and gravity for our countries, of the actions of transnational organized crime. Particularly concerning drug trafficking, money-laundering, arms trafficking, trafficking in chemical precursors, human trafficking, and others.

We mentioned to the Vice-President of the United States the enormous human, social and economic costs that the above-mentioned illicit activities have for our countries, as well as the determined efforts of our Governments to combat them.

We recall the commitments made by the international community within the framework of the International Conference in Support of the Central America Security Strategy, held in June of 2011 in the Guatemala Republic, which adopted the principles of co-responsibility, complementarity, additionality of resources, and effective investment of the same, and managing results.

We call upon the Group of Friends and International Organizations Cooperating Security Strategy for Central America, to render its assistance in the execution of the projects defined therein, especially the funds required for the implementation of the eight projects that were launched at the high-level meeting held in the city of Washington, D.C., on February 16, 2012.

We listened with attention and interest to the proposal of the President of Guatemala, Otto Pérez Molina, on the search for alternative mechanisms for the fight against drug trafficking, and agree that after this initial dialogue, we continue discussion of this initiative at the next meeting on March 24, 2012, in the Republic of Guatemala. In preparation for the same, we have formed work groups for the definition of the agenda.

We reviewed international cooperation resources available so far to implement the Central American Security Strategy, and we reiterate our conviction that it is imperative that the course of all actors is to lay a new foundation for cooperation and effectiveness in combating organized crime.

We stress the importance of strengthening the mechanisms for the exchange of information between our countries and between Central America and other countries of the international community.

We are called to address the problem of drug trafficking in a comprehensive manner, taking into account not only the interdiction efforts but the need to reduce supply and especially consumption.

We welcomed the initiative of Honduras to create a center of study and analysis in the SICA, devoted exclusively to the issue of security in Central America and the Dominican Republic.