That hasn’t stopped the proclamation of a winner, however. 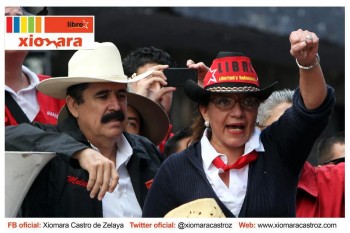 Xiomara Castro Zelaya of the Libre Party had hoped to be elected President of Honduras.

Juan Orlando Hernández made an acceptance speech after it was determined he had received over 54% of the total votes, and the National Party has begun receiving congratulations from other countries.

Meanwhile, the Freedom and Refoundation Party (Libre – El Partido Libertad y Refundación), has announced it will not accept the results of the TSE, and believes that there are inconsistencies in at least 20 percent of the proceedings.

Additionally, Libre has called for a meeting of the party’s leadership at 11 am to discuss the issue and determine the action to be taken.

Xiomara and Manuel Zelaya of the Libre Party

The progress of the count toward the Honduras election results and the ongoing tally can be seen displayed below, or at the TSE website at siede.tse.hn.

The TSE expects to have an official declaration of the winner of the 2013 Honduras General Election around approximately 2 pm today.