A passenger aboard a transport vehicle today in Honduras took the law into their own hands and killed an alleged robber.

The incident occurred at the top of the bridge that connects Estocolmo with Tegucigalpa and Comayagüela in the Central District of the country.

Witnesses said three men boarded the bus, threatening to strip passengers of their belongings. One passenger subsequently drew his gun, and shot one of the assailants repeatedly. After the attack, the other two thiefs quickly fled the scene, leaving the body of the victim lying inside the bus. 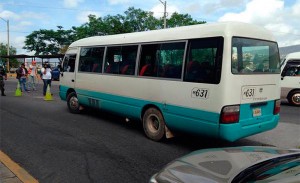 Alleged Robbery In Progress Stopped On Vehicle No. 631

One of the officers on the scene explained that the public transportation covered the Los Pinos – Centro route, and occurred on the vehicle with registration number 631.

The officer said the area was cordoned off to aid investigators in finding the other two individuals involved in the alleged robbery, “We are working the investigation, we are identifying those who fled.”

According to preliminary investigations, one of the victims of the assault “shot one of the criminals.”

The victim has not been identified, and authorities are awaiting staff of the General Directorate of Forensic Medicine.