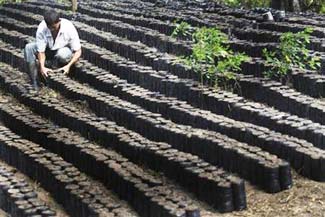 Local coffee company Cafe Organico Marcala (COMSA) was forced to rent out a nearby soccer field this year and cover it with plastic sheets to air out coffee cherries after their cement-drying patios overflowed.

“We’ve had an avalanche of coffee,” COMSA’s manager Rodolfo Penalba said, as workers raked beans over the plastic in neat rows. They survived this year by using the tarp but next year’s harvest would be even bigger, he added.

Right now Honduras only has around a dozen big coffee processing centers in larger cities or near export ports and around 20 smaller centers in more remote coffee regions.

“Honduras doesn’t have the capacity to dry all the coffee coming in 2011/12 in an efficient way, and even less so for what’s coming in 2012/13. This is going to lead to losses on a national level if the beans ferment,” said Eduardo Aguilar, the vice president of the Honduran coffee traders’ association.