The United Nations World Food Programme (WFP) voiced concern today over the impact a “severe and prolonged” drought in four Central American States may have on food and nutrition security across the region. 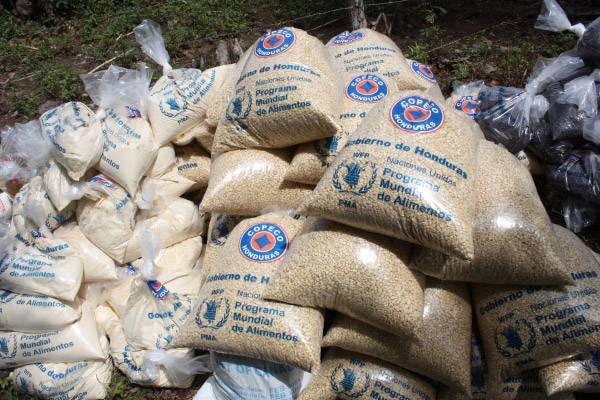 Some of the food distributed to the drought-affected communities of Las Hastas and Los Achiotes in the town of Orocuina, Choluteca, Honduras
Photo: WFP/Hetze Tosta

Speaking at a press briefing in Geneva, WFP Spokesperson Elisabeth Byrs told journalists that more than 2 million people in Guatemala, El Salvador, Honduras, and Nicaragua are in need of food assistance following a drawn-out dry spell during the first crop cycle of 2014.

According to Ms. Byrs, an Emergency Food Security Assessment conducted by the WFP and other UN agencies in Guatemala, Honduras and El Salvador reported that families had resorted to negative coping strategies such as reducing health and education expenditures, consuming seed reserves, decreasing expenditures on agricultural inputs, begging, selling breeding livestock, and selling land.

Numerous households in the three countries had also reported the migration of at least one family member over the two months preceding the Assessment.

The four Governments have requested international help to provide the affected areas with food assistance, and WFP is currently on the ground supporting Guatemala’s response for some 180,000 people. In Honduras, the UN agency has reached an estimated 56,000 while in El Salvador, the WFP has focused its response on providing nearly 40,000 people with conditional transfers of cash and vouchers.

Meanwhile, in Nicaragua, WFP and the Government had provided food to over 270,000 people affected by the dry spell.

Nonetheless, Ms. Byrs warned, a funding shortfall of $20 million was putting the next three months of essential food assistance at risk.