The memorandums were signed in presence of the President of the Republic of Korea, Park Geun-hye, and Honduras President Juan Orlando Hernández, and are intended to provide for the establishment of an electronic government partnership to strengthen the fight against drug trafficking and organized crime. The document also establishes commitments to fight poverty, and support projects that will optimize the production and distribution of energy, among other initiatives. 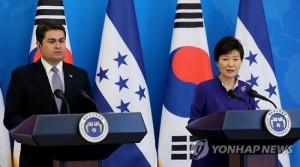 President Hernández of Honduras with President Park Geun-hye of Korea

These agreements were signed in South Korea, as President Hernandez continues his Asia tour, meeting with diplomats from three countries in this region.

The governments of Honduras and South Korea, through the Foreign Minister Arturo Corrales and the Police Agency of South Korea, recognized the need to strengthen international cooperation between police authorities in order to address transnational crime such as drug trafficking and terrorism, through the signed memorandum of understanding on security. The agreement states that both countries will cooperate in the exchange of personnel for training and education, and share and exchange advanced techniques for combating crime and maintaining public order.

Both governments will exchange skills and knowledge in the fields of law enforcement, focusing on investigative and crime prevention techniques. Digital forensics information will be utilized. Transnational crimes, including trafficking in dangerous drugs, terrorism, organized crime, money laundering, forgery and smuggling will be investigated, along with cyber-crime. Honduras hopes to strengthen security at ports and airports with the use of CCTV (Closed Circuit Television) systems as they combat the trafficking of firearms, ammunition and explosives, human trafficking, and sexual exploitation.

The governments are committed to the exchange of intelligence and information about crimes in accordance with their national law and within the limits of their responsibility.

South Korea and Honduras also signed an agreement for the mutual recognition and exchange of driver licensing. This will allow Hondurans or Koreans who move, to request a change from their original drivers license, to a license for the new country. In this regard, upon processing, the driver would not be required to take any theoretical and/or practical examination for the ability to drive a motor vehicle.

The two countries signed a MOU to implement the Honduras project “Nueva Comunidad” (New Community), which aims to further rural development and eradicate poverty. In this regard, the agreement signatories commit to carry out pilot projects in villages, supporting the promotion of leaders and experts in this initiative, and establish support for the development of projects with public-private cooperation.

Minister of Trade, Industry and Energy of Korea (MOTIE), Yoon Sang-Jick, and the Minister of Infrastructure and Public Utilities (INSEP) in Honduras, Roberto Ordóñez, signed a MOU in the field of energy.

The objective of this agreement was to establish a general framework for cooperation in developing programs and activities for the countries mutual benefit in the energy industry. The memorandums of understanding calls for cooperation in improving power transmission(*), and for supplying electric cars and charging stations in Honduras. 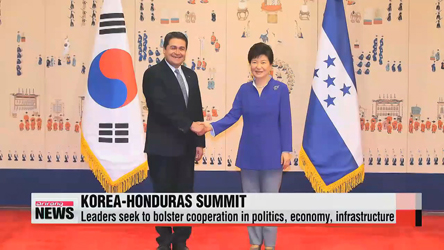 President Hernandez’s trip comes at a time when South Korea is pushing to boost economic ties with South and Central America, hoping to give a much-needed boost to Asia’s fourth-largest economy.