More than 50,000 residents in the San Pedro Sula neighborhood of Las Palmas, and others close by, will have better access to healthcare in the coming months.

The Macro Distrito de Salud (Macro Health District) building is nearing completion, according to the head of the Directorate of Municipal Health, Juan José Leiva. The structure is expected to be finalized in October, and is located on 20th Street in Las Palmas, in back of the Municipal Police building.

The healthcare center is expected to relieve some of the congestion at the Mario Catarino Rivas Hospital, and be within reach of poorer Hondurans. 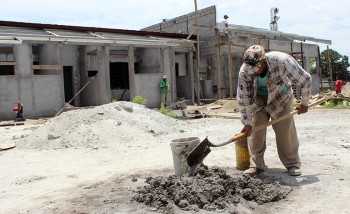 Work in progress at the Macro Health District building.

Director Leiva explained that within the Macro Health District, there will be areas for pediatrics, internal medicine, and gynecology. Their hope is to also provide complete dental care, where not only extractions are carried out, but also dental implants and more complex procedures. Unlike many current health centers in Honduras, this district will have its own pharmacy, laboratory, and an ambulance to transport patients to a hospital when required, although there will be specialist care available there.

“This is a very important project because it will put people in the hands of specialists, the health of the community will benefit from it,” said Leiva.