FBI personnel describe the threat posed by transnational gangs and the ways the FBI is working with law enforcement in the U.S. and Central America to investigate cases and reduce the threat.

At the start of the FBI’s recent Central American Law Enforcement Exchange (CALEE) program, participants from U.S. police departments and their counterparts from Mexico, El Salvador, Honduras, Guatemala, Belize, and Panama were strangers, but they shared one thing in common: a commitment to make their communities safe from violent gangs such as MS-13 and 18th Street. 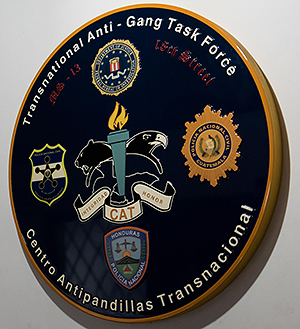 The seal for the Transnational Anti-Gang Task Force, or TAG.

By the end of the three-week program, the men and women had overcome language barriers and become friends as well as partners—and they were armed with new resources to fight the transnational gang threat: a network of intelligence sharing, expanded contacts, and access to FBI-led task forces throughout Central America.

“There’s a synergy between the gangs that helps them grow and become stronger,” said Special Agent Jason Kaplan, the FBI’s legal attaché in El Salvador. “As law enforcement, we need to develop that same relationship with each other, because the gangs are doing it, and if we don’t we are going to fall behind.”

Video: Grant Mann of the FBI’s Safe Streets and Gangs Unit describes the Central American Law Enforcement Exchange.
CALEE was developed in 2009 with that spirit of collaboration and partnership in mind. This year’s group of nearly 40 participants traveled to Los Angeles and Houston before spending a final week in El Salvador, where the MS-13 and 18th Street gangs have grown powerful and extremely violent. In each venue, participants received training and information about different jurisdictions’ approaches to managing their gang threat.

The Central American Law Enforcement Exchange. This is a concept that has really been around for quite a while. The idea was to bring law enforcement officers working on transnational gang cases, bring them together so they can share ideas, share intelligence, and work towards finding better ways to go after these transnational gangs.

In El Salvador, besides getting a first-hand look at gang neighborhoods and a prison whose inmates are exclusively violent gang members, participants were briefed on the latest cases and trends within the gangs. Many MS-13 and 18th Street leaders—some of whom are incarcerated—are located in Central America and order crimes to be committed in the United States.

CALEE participants also learned about the Transnational Anti-Gang Task Forces (TAGs), in which FBI agents are embedded with vetted Central American police officers to work cases and gather intelligence. Currently there are TAGs in El Salvador, Guatemala, and Honduras. They have been in existence for more than five years, and they are highly successful.

“Before the Transnational Anti-Gang Task Forces were set up,” Kaplan explained, “gang investigations in the United States that led to subjects in these countries often came to a dead end. There was no mechanism for us to really further those investigations.” Since the TAGs were established, he said, “we now have a liaison here, a resource for investigators in the United States. When they get to that point where they realize that one of their principal subjects is located in Central America, they now have resources where they can go to further that investigation. Similarly, the countries of El Salvador, Guatemala, and Honduras can do the same.”

Kaplan added that intelligence gathered by the TAGs has stopped crimes—including murders—from taking place. “Dozens of lives, possibly hundreds, have been saved since the establishment of the anti-gang task forces.”

“Certainly the value of the TAGs can’t be understated,” noted Special Agent Grant Mann, who works in the Safe Streets and Gang Unit at FBI Headquarters in Washington, D.C. and helped organize this year’s CALEE program. “One of our main goals for the group in El Salvador was to fully expose participants to what the FBI has here by way of resources.”

Mann’s unit also administers the FBI’s Safe Streets Violent Crime Initiative. Established in 1992, the program is designed to bring local, state, and federal law enforcement together in their U.S. communities to fight gang-related crime. Today there are 164 Safe Streets Task Forces throughout the country, and U.S. CALEE participants are drawn from the ranks of Safe Streets Task Force officers.

“The Safe Streets model combines the strengths of all these different agencies and all of our FBI resources,” Mann said. “The goal is to make everyone’s community safer. Our efforts with the TAGs and our international partners are an extension of that goal, because there is no doubt that the gang problems in El Salvador have an impact on gang crime in the U.S.”

Speaking of the cooperative efforts between the U.S. and El Salvador to fight the MS-13 and 18th Street gangs, El Salvador’s Attorney General Luis Martinez noted, “There is something very important that both countries are aware of: that we share the same serious problem and that we have to work jointly in order to find resolutions. That is why an event like CALEE 2015 is very important,” he said. “This training will be very valuable for every single participant here.”