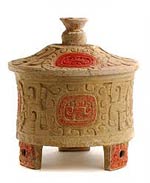 Residents and municipal authorities living near the Copan Ruins of Honduras expressed concern, outrage and sadness over “loans” the Honduran Institute of Anthropology and History (IHAH) makes without their consent.

Archaeological pieces are taken by the IHAH at will on the pretext that they will be provided for exhibitions held in other parts of the world according to the Mayor of the Municipality, Helmy René Giacoman.

“When we were at the town meeting a week ago, we learned that the Institute of Anthropology takes parts of the municipality without the consent of the municipal authority, and without the approval of the general population, and the next day will make a similar claim,” denounced Giacoman.

The Mayor of Copan said they have taken many pieces “for Europe and the U.S., which never returned to our Museum and Archaeological Park, causing irreparable damage to the Mayan culture.”

“Today they have brought back pieces of great value, but we are extremely upset that the authorities of the IHAH ignore local authorities and forget that the Copan Ruins are on land belonging to our town, and are not their exclusive property,” added the Mayor.

The Mayor is saddened that the central government “they have another goal”, and he is certain, “the President does not know of this situation, these people are gentle and stealthily go behind everyone’s back.”

He also said they have a statement signed by 23 mayors in the department of Copan, demanding they run the Honduran Institute of Anthropology and History, because the IHAH trespasses on 50 percent of their ticket revenue for the Mayan Archaeological Park.

Additionally, as artifacts are loaned out, they are not available for the people who travel to Honduras to see the treasures of Copan. There is no tourism benefit if one can simply see the sights of the Copan Ruins in New York.