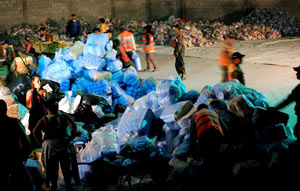 The Institute of Retirement and Pensions of Public Employees (Instituto de Jubilaciones y Pensiones de los Empleados Públicos – INJUPEMP) workers, along with their Board of Directors, donated nearly 100,000 lempiras worth of food to help with the current crisis the southern part of Honduras is facing.

The supplies were handed over to the head of the Permanent Commission for Contingencies (Copeco), Lisandro Rosales, for the victims of the heavy rains that have practically destroyed the southern part of Honduras. The food rations are intended to benefit the 390 families which are cut off from the interior of the country. These families have lost all their assets, and in some cases, even the valuable lives of family members, in this natural disaster.

More humanitarian aid is being promised by INJUPEMP to the families of the southern parts of the country; especially in the villages of Pespire and the outlying areas. This part of Honduras has been cut off because the force of the rivers and streams make passage impossible. The rains have also saturated the soil and caused landslides.

The donation from the INJUPEMP employees and Board of Directors is due to their participation in “INJUPETON”, an activity they organized to raise food and clothing for flood victims from the rains in the South of the country.