Honduras have named Colombian Jorge Luis Pinto, who steered Costa Rica to their best ever World Cup placing in the Brazil 2014 quarter-finals, as the new head coach for the Selección de Honduras (Honduras National Soccer Team). 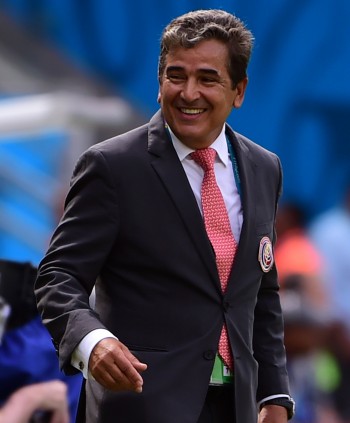 Pinto, the third Colombian to take charge of the ‘Ticos’ after Reinaldo Rueda and Luis Fernando Suarez, replaces Hernan Medford who was sacked on Tuesday after four months in charge following poor results — including a 6-0 defeat by Japan last month.

‘I am pleased to inform the football family and fans that Jorge Luis Pinto is the new H (Honduras) coach until Russia 2018!!’ Honduran Football Federation president Rafael Callejas announced on his Twitter account.

Pinto’s first competitive challenge will be a playoff against Guyana in March for a ticket to the CONCACAF Gold Cup to be held in the United States from July 7-26.
Honduras, who first played at the World Cup finals in Spain in 1982, reached the 2010 tournament in South Africa with Rueda in charge and this year’s tournament in Brazil under Suarez.

Pinto’s Costa Rica side were unbeaten in five matches at the 2014 finals including shock wins over Uruguay and Italy in their first two group matches.
They drew with England in their final group match and also with Greece, whom they beat on penalties, in the last 16. They went out on penalties to Holland in the quarter-finals.
The 61-year-old has coached Colombia and a host of club sides, winning league title with Peru’s Alianza Lima, Alajuelense of Costa Rica and Cucuta in his home country.