September 23, 2013 by Jennifer Catracha No Comments

Financiers the Office Administrator of Seized Goods (OABI – Oficina Administradora de Bienes Incautados) worked in several banking institutions of Honduras yesterday, verifying 64 accounts in both lempiras and dollars, believed to be tied to the drug traffickers, “Los Cachiros“. The research will allow specialists to establish the actual amount deposited in each account, in order to proceed with the transfer of these funds to the State.

The operation was carried out after raids on Thursday at properties of the brothers Devis Leonel and Javier Eriberto Rivera Maradiaga, accused by the United States Treasury Department as being the leaders of a gang linked to drug trafficking and money-laundering called Los Cachiros. The U.S. report also pointed to their parents, Santos Isidro Rivera Cardona and Esperanza Maradiaga; his brothers, Maira and Santos Rivera, and a Nicaraguan partner, Bismarck Lira Girón.

Yesterday, in Colón and Santa Cruz de Yojoa, Cortés, inventory was taken for seven properties which were raided on Thursday. Authorities continue with the investigations at the hotel Posada Del Rey, El Encanto hotel, and the Joya Grande Zoo and eco-tourist park.

Humberto Palacios Moya, Director of the OABI, explained, “Teams have continued their work with the inventory of all the seized items. It is an extensive work that at the end, will allow to give real value to all goods that, according to research, are linked with that organization.”

The uncertainty of the 80 employees working in the eco-park and zoo, faded yesterday, once the OABI staff met with them to explain that they will all continue to work and will keep their job seniority.

Seizure of the Joya Grande Zoo prompted rumors and questions regarding if it would continue running, and what would be the future of the 300 animals there. The concern even spread to social networks. 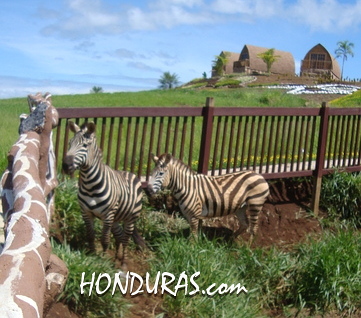 The OBI Director calmed fears and addressed the rumors,”Everything is normal. The only change that has taken place is in the Administration; but the staff, care and management of the park remain the same. The OABI has taken control and has met with employees to explain the process taking place.”

All reservations are being honored, and the park will continue to operate.

A group of tourists who had reservations arrived at the Joya Grande Zoo yesterday; the staff attended to them and guided them along the 40 blocks of paths that make up the zoo. The tourists were teachers at Chamelecón in San Pedro Sula, who were celebrating their teacher’s day by visiting. The eco-park extends 400 blocks, 40 of which are designated for the Zoo, and 100 for the canopy, two of the biggest attractions of the site.

Joye Grande eco-park is self-sustainable, so employees now have the challenge to continue with the administration in order to generate resources that do not decrease the quality of the center, and keep it the most visited  in the country.”We need to generate resources. We know that this situation raises questions and the first days caused a decline in visits, but we are prepared to move forward,” said the Administrator, Medardo Altamirano.