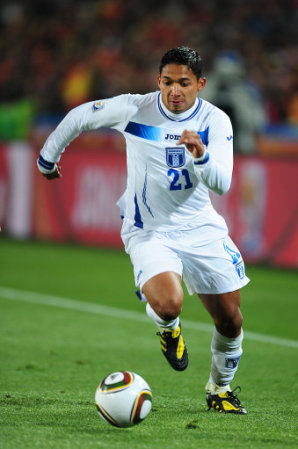 Izaguirre is a lateral and also plays soccer on one of the winning Scottish leagues.  He believes the key to success is that the team is united and together as a family, “We know a lot of players want to be here, so we must give our 100%, and never leave anything off the field” … “We know what those three commitments mean; our mentality is primarily to trust in God that all things will work out for us to get all of those points”.

When asked about the opponents Costa Rica, Jamaica, and the United States, the professional ‘futbol’ player commented, “Costa Rica is not impossible. There is nothing written yet; we have to go and fight for those first three points and win.”

“After that, we come to Tegucigalpa to play against Jamaica in our house. We expect to win here, and that everything turns out well, then, we will travel to the U.S.  These three games are tough, but I think this last one will be harder because it is in their court, and they won’t want to lose there”.

To Emilio Izaguirre, the important thing this month is to win, “Every team that is winning feels strong mentally and in every other way. I think in the mind is where every success is.  We need to work there and not leave any points behind, so that later we can’t say that we couldn’t do this or that, we must have faith in God that we will do  the best we can and give ourselves to the max.”

Editors Note:  Emilio Izaguirre, who also plays for the Scotland Celtic Tennent’s soccer team, won the (Professional Football Association) PFA Scotland Player of the Year Award for the 2010/2011 season.  He is the first South American to have won it.