Over the weekend the first batch of Marines that came to Honduras temporarily to participate in military exercises and work on humanitarian aid left the country.

Since this past June at least 180 Marines have been stationed at various locations around the country to do work on military activities, social projects, and to help provide relief following natural disasters. Some of the projects they worked on, included building a school in one of Honduras’s smaller communities.

Marines and other military individuals from the United States can still be found throughout the country some retired and living in places like Copan and Roatan and others as part of Soto Cano, or in the Marine-House in Tegucigalpa helping to provide security for the Embassy. 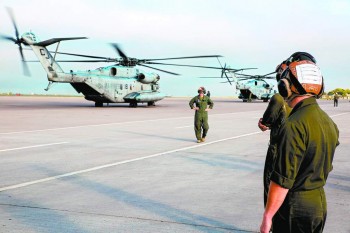 Photo of Marines preparing a helicopter for departure. Source: http://www.laprensa.hn/honduras/901747-410/abandona-honduras-primer-contingente-de-marines-de-eua