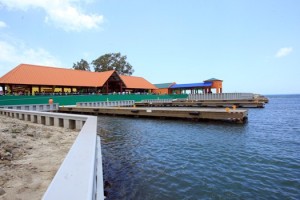 In 2014 and 2015, it is planned for three different cruise lines with five cruise ships to make 15 stops in Trujillo, bringing in around 16,000 passengers.

The president of Trujillo Group Investment Authority (GTA – Grupo Inversión Trujillo Autoridad) and manager of Banana Coast, Randy Jorgensen, recalled that back in 2011, when the first stone was set, there was a new hope for this historic city. Hope for a better future, with more opportunities, and even though some people were skeptical about the project, they can now tell that the dream came true.

Jorgensen qualified the opening of the first phase as a miracle, for which he was grateful to all of those who made the construction possible.