In response to this “shocking news,” _ ( Honduras Environmental Activist Berta Caceres and Nelson Garcia Murdered ) FMO, the Dutch development financier, decided to “suspend all activities in Honduras, effective immediately. This means,” FMO said in a statement, “that we will not engage in new projects or commitments and that no disbursements will be made, including the Agua Zarca project.” Finnfund, the second European financier involved in Agua Zarca, suspended its support as well. 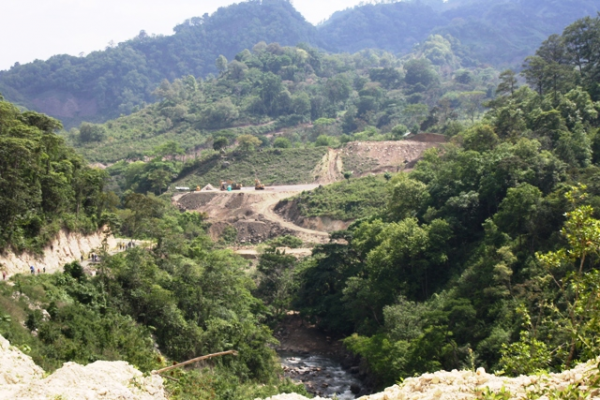 Agua Zarca Dam Construction Site in Honduras
Photo Courtesy: COPINH
On March 15, Nelson Garcia, an activist of COPINH, the Honduran organization Berta Cáceres had founded, was shot and killed when he helped a group of poor families resist a land grab in the small town of Rio Lindo. The brazen murder was not directly related to the conflict around the Agua Zarca Dam, but it showed that even under the international spotlight, powerful circles in Honduras have no respect for the lives of people who stand in the way of their economic interests.

With the withdrawal of FMO and Finnfund, the pressure is on the Central-American Bank for Economic Integration to suspend all support for Agua Zarca. With $24 million, CABEI extended the biggest loan for the dam project, and has expressed confidence “that the facts surrounding the death of Mrs. Caceres will be investigated and cleared by the corresponding authorities.”

In a joint statement, the civil society groups who coordinated the international response to the murder in Honduras, including BankTrack, Both Ends and International Rivers, welcomed the decisions by FMO and Finnfund. They also reiterated their “demand to FMO, Finnfund and CABEI that, following the murder of Berta Cáceres after years of violence and intimidation in relation to the Agua Zarca project, they fully and permanently withdraw from the project.”

If civil society networks keep up their pressure, the suspension of support by European funders must surely be the beginning of the end of the ill-fated and violent Agua Zarca Project. But this doesn’t mean that this tragic chapter can be closed:

All involved parties must continue to press for the safe release and return of Mexican activist Gustavo Castro, the sole witness of Berta’s murder who is still kept in Honduras against his will. They must press for an independent international investigation of the murder. COPINH has called on the Dutch and Finnish governments to visit the Agua Zarca site. It is also high time for the US government to end its aid to a Honduran military which has frequently been associated with the human rights abuses in the country.

Indigenous peoples are disproportionally affected by dams, plantations and other resource extraction projects and by the violence which is often part of such projects. FMO and other development financiers have a long and sorry history of projects that have engendered violence against indigenous peoples, including the Agua Zarca, Barro Blanco and Santa Rita dams in Central America. FMO, Finnfund and other financiers must unequivocally recognize the right of indigenous peoples to free, prior informed consent regarding projects on their territories. The world’s governments have recognized this right in a UN declaration, and it cannot be watered down to some kind of consultation in which the final decision rests with the investor.

Berta Cáceres’ murder has become a symbol and a rallying cry for people around the world who are shocked and outraged by the price which marginalized people, and indigenous peoples in particular, frequently have to pay for projects that are supposed to bring economic and social development. They will continue to closely monitor the Agua Zarca Project and its aftermath, to make sure that Berta’s sacrifice was not in vain.