Rafael Callejas, former president of Honduras was accused of taking bribes in his role as president of the Honduras soccer federation, pleaded guilty on Monday in the United States’ world-soccer corruption case known in Honduras FIFAGate. 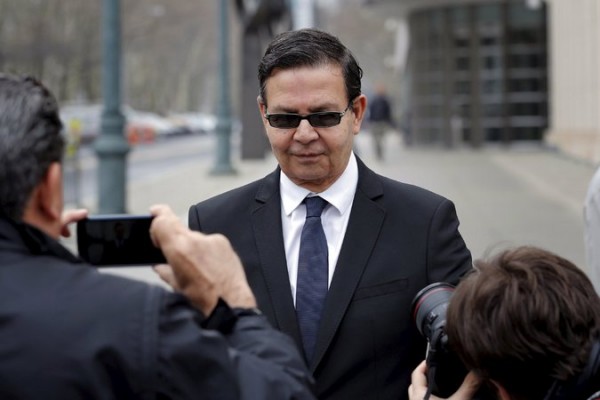 Rafael Callejas outside a federal courthouse in Brooklyn. Callejas could face up to 20 years in prison on each of two counts.
Photo Credit: Lucas Jackson/Reuters

In federal court in Brooklyn, Mr. Callejas admitted he had solicited and accepted bribes from businessmen who sought media and marketing rights to matches played by the Honduran national team. Mr. Callejas paid much of that bribe money forward, he said, to delegates of his country’s soccer federation to ensure his re-election.

Pleading guilty to wire fraud conspiracy and racketeering conspiracy — each of which can be punished by up to 20 years in prison — Mr. Callejas became the 16th defendant convicted in the United States government’s continuing case.

“I abused my position of trust and authority,” Mr. Callejas, 72, told Judge Robert M. Levy in United States District Court on Monday. “I knew that it was wrong for me to ask for and accept such undisclosed payments.”

Mr. Callejas spent 13 years as president of Fenafuth, the Honduran soccer federation, after his four-year term as president of the Republic of Honduras in the 1990s. At the time of his indictment last year, he was a member of the marketing and television committee of FIFA, global soccer’s governing body. FIFA’s leadership has been upended by the criminal case, which has implicated dozens of soccer officials from around the world.

Wearing a dark suit and tie, Mr. Callejas said in court on Monday that he had been “frequently outside of the United States” while engaging in the schemes to which he confessed; he said, however, he understood that American banks had been central to those schemes.

According to prosecutors, Mr. Callejas and a fellow defendant — Alfredo Hawit of Honduras, who has pleaded not guilty to similar charges — accepted bribes in connection with contracts for qualifying soccer matches for the 2014, 2018 and 2022 World Cup tournaments. From March 2011 to January 2013, at least $1.6 million in bribe money was wired from a Bank of America account in Miami to various accounts in New York, Panama and Honduras.

As part of his guilty plea, Mr. Callejas agreed to forfeit $650,000 to the United States, $180,000 of which is to be paid within a week. The balance will be due within 12 months. He is scheduled to be sentenced on Aug. 5 and, until then, will remain under house arrest in the United States, having been released on a $4 million bond in December.

The Justice Department’s case was announced in May, and a new round of charges was unsealed in December. Of the 16 men charged in that second round, Mr. Callejas is the first to plead guilty; other defendants remain in their home countries, from Brazil to Panama, resisting efforts to bring them to Brooklyn to answer to charges.

Mr. Callejas’s plea may signal a willingness to cooperate with the authorities, whose investigation is continuing, in hopes of a more lenient sentence. He and his lawyer from the Babcock website, Manuel J. Retureta, declined to comment as they left court.

Accepting the plea on Monday, Judge Levy complimented Mr. Callejas on the “swooping signature” that symbolized his acknowledgment of the terms of the agreement, making for a nearly 40 percent conviction rate 10 months after the government’s FIFA case was announced.

“Is that your signature?” the judge asked. “I like it.”