Council of Ministers Meet on Garifuna’s 215th Anniversary in Honduras

The Honduran Council of Ministers was held yesterday under a large tent at the edge of the beach in the municipality of Santa Fe, in the Caribbean Department of Colón. Hundreds of people of African descent, diplomats, and visitors invited from Belize, El Salvador, the United States of America, and Equatorial Guinea, acknowledged that on April 12, 2012, it has been 215 years since the arrival of the first Garifuna people to Honduras.

“We need the support of the Government and the National Congress for the implementation of a plan of integral and sustainable development of indigenous and Afro-descendant peoples,” said the President of the Organization of Ethnic Community Development (Organización de Desarrollo Étnico Comunitario – ODECO), Céleo Álvarez. He added that there must be “a route so that indigenous people and people of African descent are no longer figures of poverty”, stressed Álvarez.

The head of the Secretariat of Indigenous Peoples and Afro-Descendants of Honduras (Secretaría de Pueblos Indígenas y Afrodescendientes de Honduras – SEDINAFROH), Louis Green, elaborated on, along with members of the communities of Santa Fe, the project for a law to be sent to the National Congress. The “Plan of the Nation” initiative favors indigenous peoples and people of African descent, especially with projects aimed at children, women, youth and the elderly.

Santa Fe Mayor Noel Ruiz requested assistance from President Lobo in matters of education, health, sanitation, employment generation, and environmental protection, as well as for a cultural center and to include the area in hydroelectric projects. Ruiz stressed that there is a wealth of water in the area, and although there is “a river every 800 meters over a ten kilometer stretch” people must “cross 16 bridges”; it is wasteful.

The community of Santa Rosa of Aguán, which suffered severe damage with the passage of Hurricane Mitch in late 1998, asked President Lobo “urgently” for a safe system for drinking water, and the paving of a road, a government promise which has not materialized. The community of Iriona, requested a system of electrical energy for their community, and a bridge to connect them with the Department of Gracias a Dios. 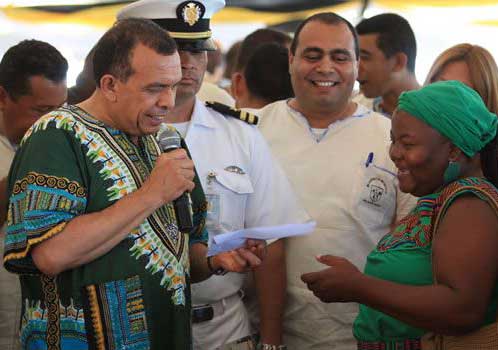 President Lobo and some of his cabinet members were in attendance. The President of Honduras promised to residents of the Garifuna communities that he would honor their demands, if possible. The Secretaries of State reported on some current programs that favor the people of African descent and indigenous peoples.