TEGUCIGALPA, Honduras – Honduras will convert a U.S.-built military airbase in Comayagua located northwest of its capital city of Tegucigalpa into a civilian airport to replace the city’s current one “Toncontin”, consistently considered one of the most dangerous in the world. 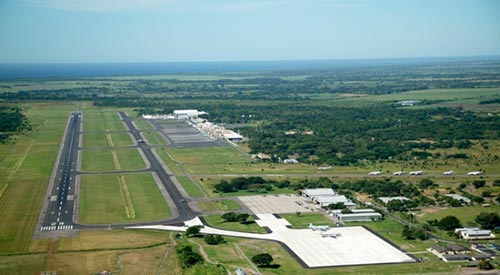 The work on the Soto Cano air base also known in Honduras as “Palmerola”, is 75 kilometers (50 miles) from Tegucigalpa, will begin in June of 2016, the project will take 18 months to complete, and is expected to cost $136 million.

The German-Honduran consortium, Inversions Emco, will carry out the project after being the only company to respond to the government’s tender.

President Juan Orlando Hernández said on his official Facebook page that the construction of an 11,000-square-meter (118,500-square-foot) passenger terminal on the base will create “more than 1,000 new jobs.”

The U.S. military built Soto Cano three decades ago as part of the U.S. strategy to counter Sandinista rebels who took over neighboring Nicaragua, and other left-wing insurgents in Central America.

Currently the base is used for U.S. regional operations against drug trafficking as well as for humanitarian and disaster relief missions. It is jointly run with Honduras, which operates an air force flight school there.

It houses 500 U.S. military personnel who are rotated every few months because Honduras’ constitution bars a “permanent” foreign military presence.

The airbase already has a runway more than 2.5 kilometers (1.5 miles) long and with a far easier approach than the current one serving the capital.

Toncontín airport, just six kilometers (four miles) from the center of Tegucigalpa, is considered extremely hazardous because of mountains and a short runway unsuitable for anything bigger than a midsize passenger aircraft (up to a Boeing 757).

The project has been opposed by many for years and the population of Tegucigalpa as well as Unions and Politicians long fought the move. But President Hernandez made a campaign promise to finally get the project done during his term. It appears he just may be able to get it done now with the financial backing of German Investors.

President Hernandez announced earlier this week that the current Tegucigalpa airport “Toncontin” will be converted into a mega-park for the public to enjoy.

Tegucigalpa Airport “Toncontin” to be converted into Mega-Park Leaving the Capital city of Honduras without an airport.
Toncontin airport has been ranked as one of the top ten most dangerous airports in the world for decades.

Leaving the Honduran capital without an airport.