Climate Change affecting Honduran Banana Exports
OLANCHITO, Honduras — The farmlands hugging the Aguán River are an endless stretch of glossy green. Swaths of fronds cover the horizon, while neat green bunches of curling fruit peek out from under the shade. Banana plantations thrive in this valley, bringing year-round work to those who cut, clean and package the fruit for export to the United States. 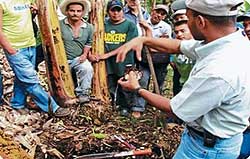 Honduran Banana Growers
Honduras exports nearly 1 million tons of bananas each year, the majority of which end up in U.S. grocery stores and produce markets.

Yet the farmers and families who grow Honduras’ fruits are under increasing strain. Over the past few years, the sweltering summer rainy season has grown hotter and drier, forcing producers to pump up more groundwater or turn to expensive irrigation systems. Cold spells during the current dry season are becoming even cooler, slowing the rate at which bananas ripen. Some smaller producers are abandoning their fields as the costs of tending to plants make farming less profitable.

“We’re living in an era of climate change,” Carlos Posas explains, gesturing toward a shroud of banana stalks during a drive through a private plantation. Posas is an engineer who teaches environmental studies at the regional university in Olanchito, a city of about 250,000 people in northern Honduras. Climate change, he says, “is affecting the production of tropical fruits here. We’re starting to see a decline.”

Agriculture generated about $2.4 billion last year and made up nearly 13 percent of the country’s $19.2 billion economy, according to the Central Bank of Honduras. 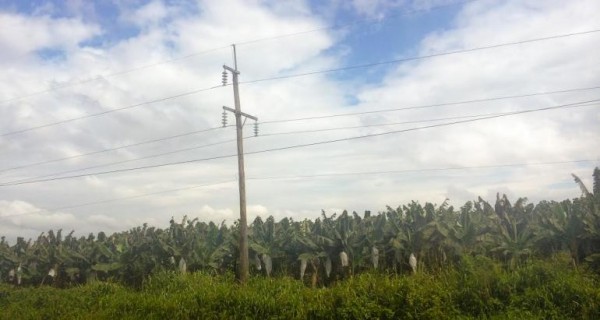 Outside Olanchito in northern Honduras, the farmlands hugging the Aguán River are an endless stretch of glossy green.
Phot: Maria Gallucci ibtimes.com

Honduras isn’t alone in its climate change predicament. Across the world, rising emissions of greenhouse gases are altering the planet’s temperatures and weather patterns. That, in turn, is changing how and where food is produced. In parts of India, higher temperatures are reducing yields of wheat and rice. Frequent droughts in the U.S. are drying up cornfields. Coffee crops in Guatemala increasingly are under attack by fungi and insects.

“Many countries will be seriously affected, especially poor countries in the tropics and small islands,” Aziz Elbehri, a senior economist with the United Nations’ Food and Agriculture Organization (FAO) in Rome, Italy, says.

Elbehri is the editor of a forthcoming book by FAO that explores how changing climate conditions are affecting agricultural production and food security in diverse regions. A chapter shared with International Business Times offers a comprehensive study on how rising temperatures, drought, declining rainfall and other effects could hurt some of the zones where bananas are grown.

The scientists behind the report looked at 24 banana-growing areas in Asia, Africa and Latin America, including Nicaragua (Honduras’ eastern neighbor) and Costa Rica. Some of their findings bode well for bananas, even when factoring in a global temperature rise of 3 degrees Celsius (5.4 degrees Fahrenheit) by 2070, which climate experts say will likely happen without dramatic reductions in emissions. Since bananas grow best in tropical conditions, most regions will still have “highly favorable” growing conditions in the second half of the century. In some places, the warmer temperatures will actually make new areas suitable for growing bananas.

But even in that scenario, producing the crescent-shaped fruits will become challenging for the farmers and workers whose livelihoods depend on the crop. Central American countries will likely see monthly rainfall decline significantly by 2050, according to the FAO report. And where average temperatures rise, more plants will become susceptible to diseases such as black leaf streak, which infects banana leaves and causes the stalks to rot.

If global warming surpasses 3 degrees Celsius, as it’s projected to do by 2100, “More areas in the tropics may be lost for banana production due to excessively high temperatures,” the scientists said.

Given these threats, Elbheri says, “It’s extremely important for governments and research institutions to start introducing adaption techniques and improve the resilience of farmers — especially small-scale farmers, who, for the most part, are unable to withstand the impacts.”

Dole Food Company Inc. known in Honduras as “Standard Fruit Company” based in the city of La Ceiba, the world’s largest fruit producer, says it is already experiencing the effects of climate change in its banana operations in Latin America.

The Westlake Village, California-based company exports a combined 70 million boxes of bananas from Honduras, Guatemala and Costa Rica each year, with much of the fruit ending up in U.S. grocery stores and produce markets. In Costa Rica, the company was recently forced to invest in irrigation systems for the first time as a result of changing rain patterns. “Pest outbreaks, such as mealybugs and scale insects, have also affected Costa Rican agriculture,” Rudy Amador, director of product stewardship and sustainable agriculture for Dole Tropical Products Latin America Ltd., says. One of Dole’s major banana suppliers in Colombia is suffering from severe drought, he adds. Snowpack from the country’s Sierra Nevada de Santa Marta mountain range has virtually disappeared, and groundwater wells are drying up.

Dole’s plantations in Honduras haven’t yet seen yields decline due to the drying climate, Amador says, but he adds, “We have witnessed increased insect pressure that may be a result of climate change. New agricultural practices have been introduced to manage this,” including the expanded use of chemical insecticides.

Honduras is also under increasing risk of experiencing more frequent and severe tropical storms because of climate change. For Dole, “Potential losses to infrastructure and plantations from hurricanes … is of major concern to Honduras,” Amador says. “The Honduran banana industry has twice been virtually wiped out by these events.” Hurricane Fifi in 1974 killed as many as 10,000 people in Honduras alone, and 1998’s Hurricane Mitch, one of the deadliest Atlantic storms on record, killed nearly 20,000 people in Central America and racked up more than $6 billion in damages.

Back near Olanchito, Posas looks out the window of a pickup truck and surveys the massive expanse of valley carpeted by banana plants, bushy mango trees and the wispy fringes of African palm leaves. After Mitch, he says, this area was a wasteland, wiped clean by the storm and subsequent flooding from the Aguán River. Nearly everything here, including the cinderblock homes and roadside shops, was developed within the last decade and a half.

The local economy has largely recovered, but the region remains vulnerable to the whims of nature and threats to agricultural production. Posas estimates that around 7,000 people work in banana fields and packaging plants in this valley, which is one of a handful of banana-growing zones in Honduras. Nationwide, about 40 percent of Honduras’ 8 million people work in the broader agricultural sector. Such jobs are critical to the developing nation, where economic opportunities are limited and around 60 percent of the population lives in poverty. (In the United States, by comparison, about 15 percent of Americans fall below the poverty line.)

As Honduras becomes warmer and drier, banana producers may be forced to cut jobs so that they can invest more money in irrigation systems and pest control measures. Plantations might also shrink in size as a result of unfavorable conditions, further compelling companies to lay off laborers and personnel. “This will have a huge impact on the population,” Posas says.

Similar scenarios could unfold across Central America, where not only tropical fruits but also cacao, corn, beans and basic grains are starting to feel the effects of climate change. A “dry corridor” of extreme drought and scarce rains has emerged in Guatemala, El Salvador, Honduras and Nicaragua. Last summer, up to 2.8 million people in the four countries struggled to feed themselves as crops shriveled and incomes evaporated, the U.N. World Food Program said in September.

“The conditions are not the same as they were 20 years ago. If they [farmers] continue producing the way they were before, they’re going to die,” Mary Lisbeth González, a senior social development specialist with the World Bank, said by phone from Costa Rica. “What are the options of people? Stay there and manage how to do it, or go somewhere else. It seems that you don’t have an option in the middle.”

González is involved with initiatives in Guatemala and El Salvador to help farmers install irrigation systems powered by solar panels. The systems cost roughly 80 percent less per month to operate than traditional technology. “With alternative sources of energy, we’re lowering their production costs,” she says. “They’ll have better margins to produce more and make more money,” which will help make farmers financially flexible, even when their crops are strained.

Dole is already investing in agricultural research to help maintain its banana production in a changing climate, Amador says. The company is looking for ways to improve plant nutrition, switch to higher-yield plants and develop new irrigation and pest control technologies. Dole is also developing banana plantations in diverse locations globally to “diminish the risk of catastrophic losses and supply interruption from severe weather events,” he adds.

Yet for many banana producers, and particularly small farmers, adapting to climate change isn’t high on the to-do list. Limited financial resources and daily demands make it difficult for many growers to focus on what can seem like a distant problem.

Elbehri of FAO says he’s hoping that will start to change this year. At the organization’s banana conference in Dominican Republic this July, an event that draws producers and government leaders from around the world, climate change will be addressed more prominently than in previous events. To help guide discussions, FAO has produced a first-of-its-kind assessment on banana production and climate change in Ecuador, the world’s top banana exporter. “We’ll use this as a case study for other countries to take lessons from,” Elbehri says.

Despite the threats to Honduran bananas, Posas says he’s certain producers will continue to grow the fruit here: Demand for the peeled plant is simply too high to pass up. “With climate change they’ll have to make certain adjustments, but I don’t think they’ll abandon it,” he says.

The History of the Banana Trade in Honduras