October 9, 2014 by Hector Martinez No Comments

In a recent op-ed in The Washington Post, former Secretary of State Hillary Clinton used a review of Henry Kissinger’s latest book, “World Order,” to lay out her vision for “sustaining America’s leadership in the world.” In the midst of numerous global crises, she called for return to a foreign policy with purpose, strategy and pragmatism. She also highlighted some of these policy choices in her memoir “Hard Choices” and how they contributed to the challenges that Barack Obama’s administration now faces. 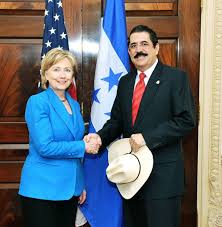 Clinton admits that she used the power of her office to make sure that Zelaya would not return to office.

The chapter on Latin America, particularly the section on Honduras, a major source of the child migrants currently pouring into the United States, has gone largely unnoticed. In letters to Clinton and her successor, John Kerry, more than 100 members of Congress have repeatedly warned about the deteriorating security situation in Honduras, especially since the 2009 military coup that ousted the country’s democratically elected President Manuel Zelaya. As Honduran scholar Dana Frank points out in Foreign Affairs, the U.S.-backed post-coup government “rewarded coup loyalists with top ministries,” opening the door for further “violence and anarchy.”

The homicide rate in Honduras, already the highest in the world, increased by 50 percent from 2008 to 2011; political repression, the murder of opposition political candidates, peasant organizers and LGBT activists increased and continue to this day. Femicides skyrocketed. The violence and insecurity were exacerbated by a generalized institutional collapse. Drug-related violence has worsened amid allegations of rampant corruption in Honduras’ police and government. While the gangs are responsible for much of the violence, Honduran security forces have engaged in a wave of killings and other human rights crimes with impunity.

Despite this, however, both under Clinton and Kerry, the State Department’s response to the violence and military and police impunity has largely been silence, along with continued U.S. aid to Honduran security forces. In “Hard Choices,” Clinton describes her role in the aftermath of the coup that brought about this dire situation. Her firsthand account is significant both for the confession of an important truth and for a crucial false testimony.

First, the confession: Clinton admits that she used the power of her office to make sure that Zelaya would not return to office. “In the subsequent days [after the coup] I spoke with my counterparts around the hemisphere, including Secretary [Patricia] Espinosa in Mexico,” Clinton writes. “We strategized on a plan to restore order in Honduras and ensure that free and fair elections could be held quickly and legitimately, which would render the question of Zelaya moot.”

This may not come as a surprise to those who followed the post-coup drama closely. (See my commentary from 2009 on Washington’s role in helping the coup succeed here, here and here.) But the official storyline, which was dutifully accepted by most in the media, was that the Obama administration actually opposed the coup and wanted Zelaya to return to office.

The question of Zelaya was anything but moot. Latin American leaders, the United Nations General Assembly and other international bodies vehemently demanded his immediate return to office. Clinton’s defiant and anti-democratic stance spurred a downward slide in U.S. relations with several Latin American countries, which has continued. It eroded the warm welcome and benefit of the doubt that even the leftist governments in region offered to the newly installed Obama administration a few months earlier.

Clinton’s false testimony is even more revealing. She reports that Zelaya was arrested amid “fears that he was preparing to circumvent the constitution and extend his term in office.” This is simply not true. As Clinton must know, when Zelaya was kidnapped by the military and flown out of the country in his pajamas on June 28, 2009, he was trying to put a consultative, nonbinding poll on the ballot to ask voters whether they wanted to have a real referendum on reforming the constitution during the scheduled election in November. It is important to note that Zelaya was not eligible to run in that election. Even if he had gotten everything he wanted, it was impossible for Zelaya to extend his term in office. But this did not stop the extreme right in Honduras and the United States from using false charges of tampering with the constitution to justify the coup.

In addition to her bold confession and Clinton’s embrace of the far-right narrative in the Honduran episode, the Latin America chapter is considerably to the right of even her own record on the region as secretary of state. This appears to be a political calculation. There is little risk of losing votes for admitting her role in making most of the hemisphere’s governments disgusted with the United States. On the other side of the equation, there are influential interest groups and significant campaign money to be raised from the right-wing Latin American lobby, including Floridian Cuban-Americans and their political fundraisers.

Like the 54-year-old failed embargo against Cuba, Clinton’s position on Latin America in her bid for the presidency is another example of how the far right exerts disproportionate influence on U.S. foreign policy in the hemisphere. by Mark Weisbrot

Mark Weisbrot is a co-director of the Center for Economic and Policy Research in Washington, D.C. He is also the president of Just Foreign Policy.