Honduran Emigration Is Economics, Not Violence

According to a report by the Reflection, Research, and Communication Team (ERIC-SJ as it is known in Spanish), Hondurans primarily migrate for economic opportunities, not to flee violence. 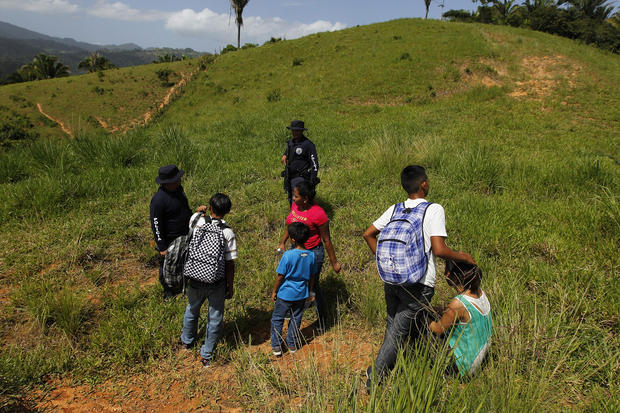 Unaccompanied minors and a family stand next to Honduran border policemen after being detained for the lack of identity documents at a porous border known as La Montanita in the small village of Suyapa, on the border of Honduras with Guatemala, June 20, 2014. Thousands of young people are hoping to reach the U.S. from their impoverished and violent homes in Central America. In the eight months ended June 15, the U.S. has detained about 52,000 children at the Mexican border, double the figure the year earlier. There is no telling how many have gotten through. Picture taken June 20, 2014
Photo Courtesy: CBS News

The report by ERIC-SJ, a Jesuit-run research and social action center in Honduras, is based on a survey of public perceptions of the country’s social, political, and economic situation, as well as the performance of the government of President Juan Orlando Hernandez. ERIC-SJ conducted the survey from November 25 to December 5, 2015, with a national sample of 1,571 valid questionnaires, which is representative of all persons over 18 who live in the country. The survey has a sampling error of +/- 2.5 percent and a 95 percent confidence level.

Regarding migration, the original site of the survey confirmed the economic crisis in Honduras as the main cause for migration. Of the respondents that had a family member who had migrated in the last four years, 77.6 percent did so due to lack of employment and a search for better opportunities. Meanwhile, 16.9 percent migrated due to violence and insecurity. In comparison, the 2014 ERIC-SJ survey showed that 82.5 percent migrated for the former causes and 11 percent migrated for the latter. So while violence and insecurity have grown in importance among causes for migration, they continue to lag far behind economic factors as the primary cause.

Homicide rates in Honduras have been decreasing since 2012.

However, the Obama administration’s narrative insists that Central Americans are fleeing violence and as such should be welcomed into the United States with open arms as “refugees.” This narrative ignores the economy as the primary push factor for migration, as well as the pull of incentives created by the Obama administration in its refusal to enforce immigration laws.

The 2015 survey also showed that, of those who were surveyed, 55.3 percent did not wish to emigrate or had not thought of doing so. The majority wants to stay home.