Hundreds of protesters came out in support of Radio and Globo TV journalist David Romero Ellner yesterday at his hearing outside the Honduran Supreme Court. Over 500 extra police and military officers were on guard in front of the Supreme Court to ensure a peaceful proceeding. The Radio and Globo TV Director was in Tegucigalpa to receive sentencing after his November conviction. Ellner was found guilty in 2015 of six counts of slander and defamation of character when he broadcast information that led to one of Honduras’s greatest corruption scandals. Supporters believe the charges against Romero equate to political persecution for his denouncement of the current government’s corruption. 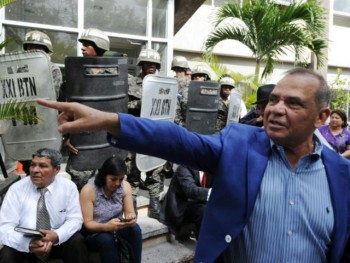 The Radio and Globo TV entity itself was accused of 15 counts of slander and libel, while Ellner was found guilty of six crimes.

David Romero Ellner told the local media Wednesday that he would accept the judge’s ruling, saying, “Yes I accept it, but I do not know if the people will accept it.” “… I am law-abiding, I have always been, and I have been present even though I know it is a flawed trial.” According to Romero’s lawyer, the defense is seeking the minimum sentence of eight years, while prosecutors are aiming for the maximum sentence of 16 years in prison.

In the end, the court delayed sentencing until February 9th, 2016, and Romero was released.

Romero was one of the journalists who uncovered the Honduran Social Security Institute (IHSS) scandal. Government employees at the IHSS and other high officials allegedly stole some US$200 million through inactive shell companies to pay for luxurious lifestyles. Some of the stolen money was discovered to have been contributed to the political campaign of Honduras’s current President, Juan Orlando Hernandez.

The fraud nearly destroyed the national health service, and left the poorest Hondurans without medicine or supplies for operations. The controversy resulted in massive protests for months with citizens demanding justice and an end to the corruption. David Romero Ellner’s trial was highly controversial, with him claiming at one point that the current government was attempting to have him assassinated. 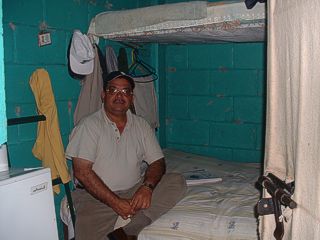 Romero Ellner in his cell at the Marco Aurelio Soto National Penitentiary in 2004, serving time for an unrelated crime.