Honduran police in the city of Gracias, Lempira, were able to capture seven alleged members of a gang engaged in the theft of vehicles. 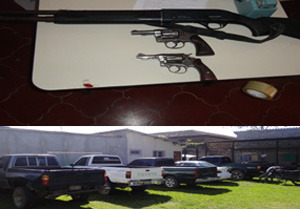 The operation was carried out in the village of Mejocote, where authorities proceeded to raid several houses of the Perdomo Molina family, who, according to anonymous complaints filed with the DNIC, are alleged to be responsible for many crimes, such as the theft of vehicles and motorcycles, homicides, illegal carrying of weapons, and other illicit activities.

At the time of their capture, the defendants were in possession of a stolen Toyota, a Nissan Frontier, a Toyota 4×4 pickup, Toyota Tacoma, and a motorcycle. Additionally, the criminals had in their possession three firearms and ammunition.

The national police are currently conducting research into identifying other members of this gang dedicated to committing criminal acts against the citizens of Gracias, Lempira.