February 15, 2012 by Hector Martinez No Comments

The President of Honduras said that “today is a day of deep pain for Honduras, we deeply regret what happened, and I would like to express my solidarity with the families of the compatriots who lost their lives in the Comayagua Penal Center”.

In front of reporters from local radio and television stations, President Lobo Sosa asserted that the Government will provide all necessary medical care to the injured.

“In the midst of pain, I want to express to the families that we are offering transportation from Comayagua to a special place near the capital morgue, where once we have identified the bodies, we will make the necessary transfer to their place of origin, with the accompaniment of relatives, and will give all necessary support for their Christian burial,” the President assured. 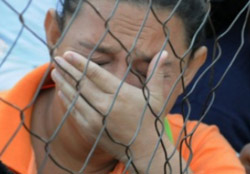 He added that the armed forces, the Permanent Commission for Contingencies (Copeco) and the fire brigade, will assist in this task.

“We will concentrate, furthermore, all our efforts to streamline the task of recognition of bodies; we have assigned all forensic medical personnel that we have,” President Lobo added.

The President reported that he has received additional calls of support from The United States of America, Colombia, and Nicaragua. The President of Nicaragua, Daniel Ortega, has expressed his solidarity, and has offered help.

President Lobo confirmed that the entire investigation to determine the cause that led to the unfortunate and unacceptable tragedy and to deduce those responsible, will be alongside an independent inquiry. The independent inquiry will be consisting of persons with great moral authority, accompanied by international figures, that is performed within the framework of national laws to ensure the certainty and reliability of the results and conclusions, which will ensure a process of total transparency.