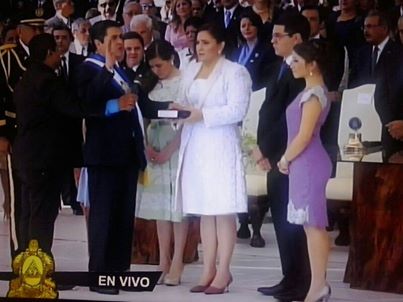 Hernandez, 45, will oversee an $18.4 billion economy that has struggled under violence fueled by drug gangs with ties to Mexican cartels and an agricultural virus that cut coffee output in Central America’s biggest producer. The economy will expand 2.8 percent this year, up from a four-year low of 2.6 percent in 2013, according to the International Monetary Fund.

Hernandez defeated Xiomara Castro, wife of deposed former President Manuel Zelaya, to win the Nov. 24 vote. Yet with his National Party holding just 47 seats in the 128-member Congress, down from 71 under outgoing President Porfirio Lobo, Hernandez will have to build alliances to rein in a widening deficit, fight crime and boost growth. Castro’s Libre Party has 39 seats, while the Liberal Party holds 26.

Hernandez last week signaled he is willing to negotiate changes to an $800 million package of tax increases and spending cuts put in place following the election, including a 15 percent tax on basic food items. The legislation was meant to help stem a deficit projected to reach 6 percent of gross domestic product last year, up from 3.9 percent in 2011.

A lawyer by training with a Master’s degree from the State University of New York at Albany, Hernandez was sworn in during a ceremony at the national stadium in the capital, Tegucigalpa.

Hernandez upon taking the oath of office as Honduras’ president, he “immediately” ordered the security forces out onto the streets to combat crime.

As former president of the Honduran Legislature (Congress), Hernandez – in addition to being an attorney by training, he has been a lawmaker since 2008, a tourism industry businessman and a reserve infantry lieutenant – and has promoted the creation of the Military Police consisting of 5,000 officers, which began operations last November under the authority of the Defense Secretariat to reduce crime in the country.