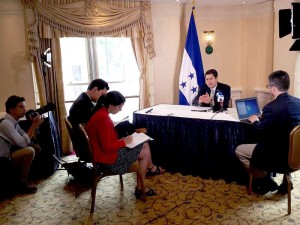 The Honduran President is in the United States today.

President Hernández arrived last night in the US capital, and plans to participate in a forum in which action against hunger in Latin America will be discussed.

Our Honduran leader has been interviewed by foreign media, and expressed it is the interest of Honduras to strengthen partnerships with the OAS in the fight against violence and corruption. He also noted that he will discuss with Biden US support for the Partnership Plan for Prosperity in the Northern Triangle of Central America (Plan Alianza para la Prosperidad del Triángulo Norte de Centroamérica).

Honduras, Guatemala and El Salvador are requesting funds from the U.S. Congress in the amount of $1,000,000 USD to implement the initiative. The plan will be presented directly to their Congress by the three Central American governments.

President Orlando Hernández stated that, “there is clear evidence (of) how things are working in Honduras. We have taken the decision to intervene around the seven institutions. Senators and congressmen of the United States have a clear x-ray of what’s going on.”