Honduras: On Brink of Congressional Warfare

Honduran President-elect Juan Orlando Hernández was officially sworn in as the country’s leader on January 27, triumphing over The Liberty and Refoundation (LIBRE) and Anti-Corruption (PAC) parties.

The conservative businessman-turned-politician brings with him not only a slew of allegations, including electoral fraud and corruption, but opposition from two new rival political parties that combined fill almost half of the National Congress’ seats. Inciting not only popular, but what will soon be congressional outrage, the Hernández administration could set Honduras down an ugly path of imminent legislative conflict. 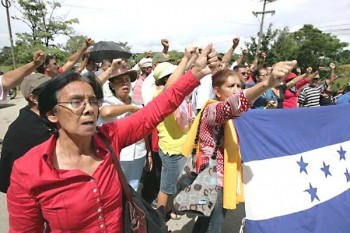 Preliminary reports by the European Union declared the election “clean.” Since then, however, the union’s international observer Leo Gabriel of Austria has defected, claiming illegal electoral practices.

“I can attest to countless inconsistencies in the electoral process. There were people who could not vote because they showed up as being dead, and there were dead people who voted… the hidden alliance between the small parties and the National Party led to the buying and selling of votes and credentials …” said Gabriel, in an interview with Brazil’s Opera Mundi.

He continued, detailing the illegal practices. “During the transmission of the results there was no possibility to find out where the tallies where being sent, and we received reliable information that at least 20 percent of the original tally sheets were being diverted to an illegal server.”

Nonetheless, Hernández was proclaimed victor of the election. He has already begun his campaign to militarize the country’s national police force, further the privatization of natural resources, and liberalize the country’s economy. However, the coffee cultivation, hotel and telecommunications mogul will be met with resistance from his left-wing political opponents in the congressional arena.

Although LIBRE is beginning its legislative opposition to the President-elect’s administration, tensions between Hernández and the newly-formed party can be traced several years back. Castro, the party’s leader, is the wife of former President José Manuel Zelaya, the democratically-elected leader who was removed from office in a 2009 coup d’état. Zelaya, then representing the Liberal Party, moved farther to the left toward the end of his presidency, forging alliances with the late Venezuelan leader Hugo Chávez and other members of the Bolivarian Alliance for the Peoples of Our America (ALBA). His administration sought to invest more government funds toward education and social programs while establishing a direct-democratic constituent assembly.

Following the 2009 coup and Lobo’s rise to power, Honduras’ National Popular Resistance Front (FNRP) orchestrated mass protests against the government and eventually formed its political arm, LIBRE, in 2011 when it received approval from the National Congress to structure an official party. With Castro at the helm of the party’s leadership, the Central American country widely regarded for its longstanding conservatism experienced a grassroots embracement of revolutionary culture and thought.

Campaigning on the promotion of low-cost access to healthcare and education, she managed to come in second place during the country’s last presidential election, earning approximately 29 percent of votes. Upon the TSE’s announcement of Castro’s loss, thousands of Honduran students took to the streets to protest the decision and were subsequently struck with tear gas fired by national military police.

However, LIBRE’s leadership has recognized the likelihood of uprisings led by constituents compromising the party’s political diplomacy and has drafted a new plan of congressional action that appeals to both street activists and legislative reformists.

Last month, National Congress member Jari Dixon, representing LIBRE, announced that his party and the FNRP will legally split for “strategic purposes” – he assured reporters the two entities remain ideologically united and are only dividing for functional purposes. Castro and her husband will remain within the leadership of LIBRE while activist Juan Barahona will assume Zeleya’s position as General Coordinator of the FNRP. It is likely that LIBRE, holding almost a third of the congressional seats following the election, will employ legislative opposition to Hernández’s administration while the FNRP, still regarded as a popular grassroots force in Honduras, will launch proletarian opposition, utilizing mass protests and labor strikes as their mobilizing vehicles. Combined, both may create the conditions for potential domestic conflict in one of the few Central American countries that has not had strong leftist representation in its National Congress.

Although Nasralla’s PAC does not openly identify with any concrete political ideology besides “anti-corruption,” the group has decided to side with LIBRE in its congressional efforts to block many of Hernández’s proposals. Both the FNRP and LIBRE also have moral support from Bolivia’s Evo Morales, Ecuador’s Rafael Correa and Venezuela’s Nicolás Maduro.

While Hernández may have been recognized as the victor of Honduran presidential election by the TSE, he certainly does not have the overwhelming support of a large portion of the country’s population or of his National Congress. It is important that he recognize the congressional power his political opponents possess, otherwise Honduras as we know it could become victim to congressional gridlock, party radicalization, or popular unrest. It would be wise for the newly elected leader to pass legislative policies that appeal to LIBRE and PAC’s platforms, stressing a more egalitarian distribution of wealth to avoid the elevation of domestic conflict.

Ramiro S. Fúnez is a Honduran-American political journalist and activist earning his master’s degree in politics at New York University.