Honduras is building up its naval force to deal with the escalating drug trafficking that has led to increased addiction as well as abuse of the Central American country’s terrain for cross-border smuggling.

In order to combat the rising drug trafficking in the country; Honduras signed a 13-year lease with option to purchase six Damen Stand 4207 patrol vessels and 6 Damen 1102 Interceptor boats to bolster the navy. The Dutch-Honduran deal was co-signed and guaranteed by the Netherlands. 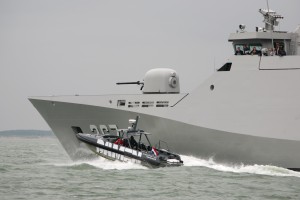 The contract immediately triggered controversy because of the way it was awarded to a brand-new company, Maritime International Services, formed just six months before the signing. Critics also objected that the discussion on the deal was held behind closed doors in the Honduran congress.

The $62 million contract with Maritime International Services is one of several recent moves by Lobo’s administration to better equip the armed forces.

Officials said the boats would help Honduran military in the Gulf of Fonseca to patrol the Pacific waters more effectively and to prevent further expansion of drug trafficking through the country. The waterway borders El Salvador, Honduras and Nicaragua.

“We have had some activity also against organized crime because we have identified that there is the possibility of making an alternate route for drug trafficking in the country.”

Honduran officials said a stronger naval force would also help the country deter harassment of its fishing crews by naval and police units from neighboring Nicaragua and El Salvador.

“We know that it is important to maintain a balance in the area, peace and tranquility, but above all, the coordination and understanding of the three countries is necessary to ensure that the sector of the gulf can be exploited rationally,” Pascua said.

The fish stocks in the gulf’s waters are already inadequate for the number of fishing crews in the area, he said.

Lobo and Nicaraguan President Daniel Ortega met recently to discuss measures to promote the area as a zone of peace and sustainable environment but tensions remain. 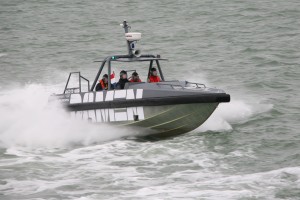 Lobo’s administration has also come under fire for not doing more to eliminate human rights violations, many allegedly by the armed forces and police.

U.S. administration officials have reacted angrily after a teenager was killed by Honduran troops trained and vetted under U.S. supervision.

Ebed Yanes, 15, was killed May 26 after driving through a military checkpoint. His father, Wilfredo Yanes, tracked down the soldiers and uncovered an alleged high-level attempt in Honduras to hide evidence.

“The incident with Ebed Yanes was a tragedy and we urge the Honduran government to assure the perpetrators are brought to justice,” U.S. State Department spokesman William Ostick said in Washington.

The drug crisis complicates matters for Honduras which has been unable to persuade the U.S. government to resume U.S. aid, suspended over the country’s human rights record.