On the  United Nations (UN) International Day of the Worlds Indigenous People, which is celebrated on August 9th, the Honduran Government, through the Ministry of Indigenous and Afro-Honduran (SEDINAFROH), calls for civil society organizations to participate in contributing to the development of ethnic groups throughout the country. 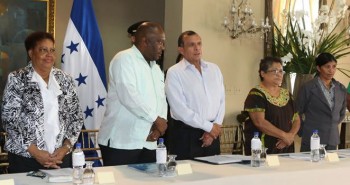 President Pepe Lobo on Wednesday held an event at the Presidential Palace, acknowledging the upcoming International Day of the Worlds Indigenous People, whose primary purpose is to raise awareness that ethnic groups should have greater inclusion in education, health, education, work and politics.  According to the President, we can have diversity, but that does not mean that some have fewer rights and less dignity.

The leader of SEDINAFROH, Louis Green, said that Honduras is signatory to a number of instruments for the protection of indigenous peoples in the areas of culture and identity, especially Convention 169 of the International Labour Organization (ILO).

He stressed that the government of President Porfirio Lobo, has given a priority to asserting the historical rights that have been forgotten by other governments, in education, health, nutrition and labor.  As proof, they have delivered more than 800 youth scholarships for students of the nine Afro-Honduran peoples, to the National Agricultural University (UNA) of Catacamas.

The representative to Honduras from the The United Nations Population Fund (UNFPA – El Fondo de Población de las Naciones Unidas), Hugo Gonzalez, said that the event must remind the States to advocate for the respect, dignity and equality of indigenous peoples, in education, health, nutrition, employment and political participation.

“… the nine indigenous peoples of Honduras, today is your day,” exclaimed President Pepe Lobo of Honduras.

The event was attended by the Vice Minister of SEDINAFROH, Magali Hernández;  a representative of the Lenca people, Cándido Martínez;  the director of the Graduate School of Public Administration,  Roberto Sánchez Villela of the University of Puerto Rico,  Palmira Ríos;  the president of  the Center for Autonomy and Development of Indigenous Peoples, Myrna Cunningham, and other diplomatic entities.

In 2004, the Assembly proclaimed a Second International Decade, from 2005 – 2014, with the theme of “A Decade for Action and Dignity.” The focus of this year’s International Day is “Indigenous peoples building alliances: Honouring treaties, agreements and other constructive arrangements.”