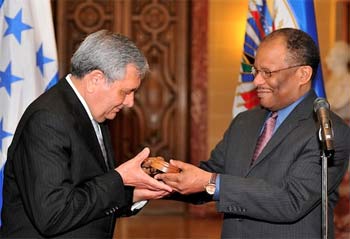 Rosa Bautista will hold the position for the next three months.

“The chairmanship that we begin now has the goal of continuing the tone of responsibility, affability and consensus,” established by Bautista’s predecessors, he said.

“During the period of Honduras’ chairmanship we are going to have two hemispheric events of great importance; the Summit of the Americas in Cartagena de Indias and the OAS General Assembly in Cochabamba [Bolivia],” Bautista said.

The Ambassador said this would mark the third of four countries in a row “bathed by the waters of the Caribbean” to assume the council’s chairmanship, promising to “stamp some of the joyful and festive nature of our warm and generous lands” on the position.