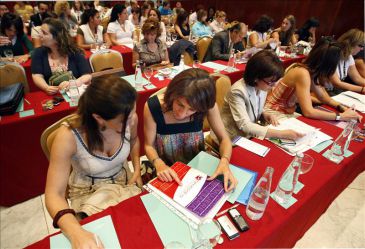 Over 150 local and international representatives are convening at the First Regional Conference on Women’s Economic Rights held in Tegucigalpa.

The women’s conference is concentrating on developing funding programs, entrepreneurship and public policies with gender equality at a regional level.
The initiative is seeking to “analyze and recommend concrete actions to promote the necessary changes” in the region for a “proper integration and participation of women in economic and social development,” said the Central American Bank for Economic Integration (BCIE), in a statement.

The meeting was convened by BCIE, the Council of Ministers for Women in Central America and ONU Women. The meeting is being held in the auditorium of BCIE with the participation of the UN regional director for Mexico, Central America, Cuba and the Dominican Republic, Ana Guezmes, and Vice President of the regional body, Alejandro Rodriguez.

The conclusions and recommendations of the conference will be raised at the XXXIX Summit of Heads of State and Government of the Central American Integration System (SICA), which begins today in Honduras. In SICA member countries, the percentage of women without their own income, that is, without any salary, ranges between 30% and 40.8%, while the proportion of men comes only to 16.1%, according to figures from the Economic Commission for Latin America and the Caribbean (ECLAC).