Construction has begun on a 61MW solar power plant in Honduras. 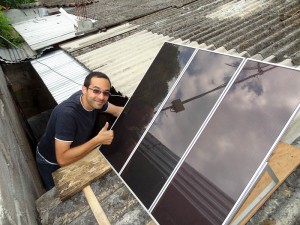 Honduras is set to lead a 1.5GW surge in Central America PV installations up to 2018.

The project is being developed by Gauss Energia and is called ‘Aura Solar II’ and is scheduled to be fully operating by mid 2015.

Aura Solar II will help reduce fossil fuel use, spanning 150 hectares in Choluteca, south Honduras, making the most of high solar resources of up to 5.5kWh per meter squared a day.

Around 200,000 polycrystalline modules are to be installed, generating approximately 125GWh a year.

Power is to be supplied to Honduras’ state utility, National Electric Energy (ENEE) with a congress approved support agreement and a 20 year Power Purchase Agreement.

The 61MW solar power plant is part of the ‘Aura Solar Initiative’, which has so far utility-scale solar developments in Mexico and is now shifting focus to Honduras. The Aura Solar I project in Baja California Sur, Mexico, was developed under the iniative.

Daniel Servitje, chairman for the Aura Solar Initiative, said: “We have a huge responsibility in the search for new energy sources that are friendly to the environment and at the same time, meet the challenges of competitiveness and energy security must confront the future generations.”

According to analysis by IHS this September, Honduras is set to lead a 1.5GW surge in Central America PV installations up to 2018.