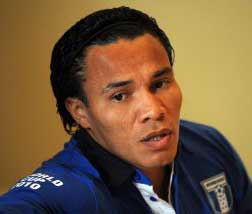 Honduran midfielder Julio César “Rambo” León will not be playing in the friendly match Wednesday against Costa Rica, due to an injured ankle.

“Rambo”, one of the Bicolor sensations, could not even train on Tuesday, the second and final day of practice before the match.

The Honduran player was injured in the Motagua vs. Olimpia game played on March 25th. The Honduras Federation has confirmed that he will not be in action on the field for the game.

Raúl Pérez, the team medic, also announced that defender Mauricio Sabillón may not be starting for Honduras, due to a pain in his right foot. “Specifically, in the first metatarsal, he has significant problems when jogging, running, or hitting the ball” he explained.