During the last few months, the tension between the Executive and Legislative branches of the Honduran Government towards the Judicial branch has been on an upswing. The reason has been a series of proposed laws that both the executive and legislative branches have proposed as a means of solving some of the most serious problems that Honduras has these days: insecurity and lack of employment.

The Honduran security tax, the proposed creation of “Charter Cities” in Honduras and police cleanup law are perfect examples of these law initiatives. There is no doubt that they are necessary steps towards solving the local security problems in the country, however they have been drawn up with such haste that they have been seriously flawed and are wide open for different sectors of the Honduran society to shoot them down.

The Police Cleanup Law has the backing of the vast majority of the Honduran society, however, a group of police officers filed a habeas corpus suit against the law that they considered was unconstitutional, because it denied them the right to due process, which is guaranteed under the Honduran Constitution. The Constitutional Court of the Honduran Supreme Court, which is formed by five Supreme Court justices deliberated on the suit and came up with a 4 to 1 vote determining that the law was in effect unconstitutional, because it did not give the police officers a right to due process.

Honduran President Porfirio Lobo Sosa was appalled; took the decision as a personal vote of no confidence against his administration and declared the court a public enemy of the state of Honduras!

The president of Congress, Juan Orlando Hernandez also expressed his dissatisfaction with the decision, and last Monday called for an investigation over the administrative procedures of the constitutional court of the Judicial branch of government. The congressional committee in charge of the investigation concluded within 24 hours after being sworn in, and without having even having spoken to the Supreme Court Judges, that they were at fault for voting against the Police Cleanup Law and decided to fire them after a night long session. 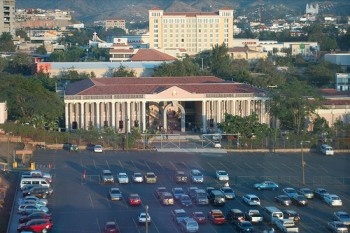 During the deliberation period, army and police officers cordoned off the area around the congress building, as well as at the Supreme Court of Justice headquarters. Last night at around 9:15, Marvin Ponce, the vice president of Congress declared that Congress was deliberating firing the entire Supreme Court which consists of 15 Judges that are elected for a 7 year term. The current members were sworn in on January 25, 2009.

Ponce mentioned that the members of the National Party, which is in power, were afraid that the court would accept a request from presidential contender Ricardo Alvarez to conduct a vote by vote re counting process of the November 18 electoral process, because Alvarez argues that many of the documents that were issued by the voting stations were not reliable. Alvarez had already declared to the media that he would present the request to the Supreme Court today, December 12, 2012 and it is apparent that Hernandez wanted to send a clear message to the court that he would not accept a recounting of votes. Of course most of the Honduran population believes that if he refuses a vote by vote count, it can only mean that he is afraid that he might lose the count!

The final voting in Congress to destitute the Supreme Court Judges took place at 4:00 a.m. local time this morning. The vote, which needed two thirds of Congress to be binding, passed with a total of 97 votes in favour and 31 against the process.  By 6:30 a.m. Congress already had decided who the replacement judges would be and had them in the building ready to be sworn in!

Many of the most representative civil organizations have expressed their rejection to this process, which is highly questionable. The Cohep, and ANDI have both repudiated the action, as well as the presidential candidate for the Liberal Party, Mauricio Villeda, a well respected lawyer who last night declared that Congress did not have the authority to sack the Supreme Court justices.  Salvador Nasralla, presidential candidate for the Anti-corruption Party said late last night that congress has acted like thieves, working at night while the good people of Honduras were asleep!

Incredibly, as of 5:00 p.m. today, the president of the Supreme Court of Honduras, Judge Jorge Rivera Aviles, and the Honduras President – “Porfirio Pepe” Lobo Sosa have not expressed their thoughts and both have avoided press members all day long. The same can be said for the attorney general. In the meantime, the Honduran Bar Association has already presented a Habeas Corpus process in the Supreme Court against what they claim is an illegal destitution where the judges did not even have the right to talk with the accusing congress, much less have a due process.

Ricardo Alvarez also presented his case to Supreme Court earlier today. Both of these procedures are expected to be turned down by the new members that were sworn in by Congress this morning at the crack of dawn!

The magistrates that were stripped of their condition as judges are the following: José Antonio Gutiérrez Navas (President), Gustavo Enrique Bustillo Palma, Rosalinda Cruz Sequeira y José Francisco Ruiz Gaekel. In a press conference earlier today, all of the above Supreme Court Judges declared that the destitution is the result of an illegal process and that they have been moved because they were doing their job based on the precepts of the Honduran Constitution and not the political pressures that they have been subjected to in the previous days. It is unclear if they will fight the process at all.

Earlier Tuesday December 12th, 2012, Hernandez justified the actions taken in Congress were to break apart a conspiracy against the state that police, sheriffs, judges and supreme court magistrates were orchestrating against the Honduran state. These members were all part of organized crime and they were about to destroy the advances that have been made in the police clean up process that has taken place in the last 6 months Hernandez said.

Keep up to date with further developments on the Honduras 2012 Coup and more on our Facebook Page!