September 9, 2013 by Jennifer Catracha No Comments 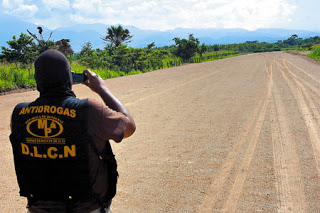 As part of Operation Armadillo, last week members of the Honduran military began the destruction of six clandestine airstrips.

Explosive experts from the Battalion of Engineers (Batallón de Ingenieros) and members of the Naval Armed Forces are gutting elusive landing areas suspected of being used by narcotraffickers.

The first strip destroyed with dynamite was located in the area of ​​Ramal del Tigre. The small runway was 1,300 meters long, and beside the Ulua river, making it easy for criminals to move shipments arriving by air, quickly to a waiting boat.

Operation Armadillo was implemented to hinder the the movement of bands of drugs across Honduras.  Other airstrips are on schedule to be destroyed in Atlantida and Yoro.