The auxiliary bishop of the Catholic Church in San Pedro Sula, Romulo Emiliani, emphasized that tomorrow, there will be no “signing of a truce” by the Mara Salvatrucha MS 13 and Bario 18 gangs on Tuesday (May 28, 2013).

The Catholic leader explained, “First of all I’m not a seller of false hopes. A very simplistic view would be to say that tomorrow they will make peace, but this is not so, since this is a process slow and painful, exhausting, and I do not think that tomorrow they sign anything.”

“On Tuesday morning the gangs will make a public declaration of a truce between them, and to apologize to society and ask the government for a dialogue, they are seeking a dialogue with the police to change their way of life. It is the beginning of a possible truce,” said Bishop.

Emiliani, who on several occasions has served as mediator in conflicts with inmates of the San Pedro Sula prison, said that on Tuesday both gangs will make a statement, seeking reconciliation with Honduran society.

According to the religious man, “What they expect to achieve is to be given space to work and integrate into society slowly.” “This is slow, exhausting, and takes a lot of patience, but the important thing is that they are finding that this other road only leads to death. They are tired of so much death, are afraid … they’ve lost hundreds and hundreds of members, in both gangs.”

The Auxiliary Bishop offered that the first step will be tomorrow, and in a way is uncertain, although it’s not something that started impromptu; but it is an issue that he has been trying to accomplish since 2006, and really has been quite frustrating, as until now, there were no positive or encouraging results. Emiliani even said he was not optimistic about the supposed truce, as “it is more a matter of faith, and tomorrow they will prove to society that they want to change and to seek forgiveness.” … “Then, as a result, come to a truce. This issue is complicated because there is a history of terrible injuries, they hate because they have killed a lot of them,” he said.

“There is a long story of death, resentments, as many neighborhoods have grown … so only the power of God can heal …”

He confirmed that achieving peace in Honduras, “it is a difficult path, whose results will be seen in two generations.” … “We are growing, but it will be others who will reap,” he said.

Father Emiliani explained that it takes at least two generations to start seeing the results, since this is only the sowing of the seed, the fruit will come over the years.

“A very simplistic idea is that tomorrow we will have peace, but no, as I have spent years on this, and it is a frustrating story, very painful, as many guys who’ve helped in the recovery are dead,” he said. He recalled cases where gang members were released from prison, but then murdered by members of their own gang, the rival gang, or mysterious groups.

Statements from the Honduras gangs is set for tomorrow at 9:00 am at the prison in San Pedro Sula, Cortes. 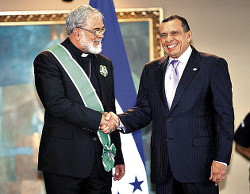 Honduras Bishop Emiliani received the Jose Cecilio Del Valle Award in December of 2011 from President Lobo for his dedication in working with young people and the poor of Honduras. Emiliani has served as auxiliary bishop of the diocese in San Pedro Sula, Honduras, from May 4, 2001 to date. He founded the organization “United for Life”, which aims to rehabilitate young gang members; and in 2007, the Association “Back to life”, in order to rehabilitate alcoholics and drug addicts.