Today the leaders of the MS13 and M18 gangs apologized to Honduran society today from the prison in downtown San Pedro Sula.

Even the champion for the cause, Auxiliary Bishop Romulo Emiliani, yesterday wasn’t certain the event would take place today, but he relied on his faith in the almighty, and his dream became a reality.

In the early morning hours, President Pepe Lobo phoned the Auxiliary Bishop the Diocese of San Pedro Sula, Romulo Emiliani, thanking him for his efforts on behalf of the Honduran people, for what he has started. He wished the Monsignor the best of success, and said he was willing to support the Auxiliary Bishop and the OAS Representative Blackwell* in “all that is necessary”.

The President compared this initiative to the presidential program “Honduras for Life”, and said he awaits the outcome and scope of these talks that are expected to benefit the country.

At 9:00 am, Monseñor Romulo Emiliani and Canadian Adam Blackwell of the OAS, arrived at the prison to start the peace process, and in the end, the leaders of each representative gang, from their separate enclosures, formally apologized to society. 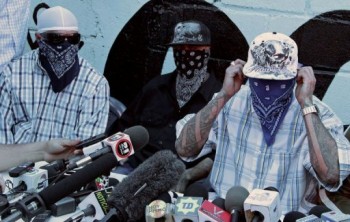 Honduras Gangs Apologize to Honduran Society
on May 28, 2013

Talking with mediators Father Emiliani and OAS representative Blackwell, gang members of both groups discussed stopping extortion and all kinds of crimes.

“We ask God for forgiveness.  If we have done something wrong, we want to have a clear conscience”, said leaders of the MS13 gang this morning from the San Pedro Sula Prison.

They stressed that the truce is “zero crime, zero violence” and that all they ask for are opportunities to work.

The inmates expressed their concerns to the authorities, and requested opportunities to “have a life, teach our children to work, that young people have places, jobs and can learn a trade.”

Gang leaders emphasized they have faith in God, and, “we will bear good fruit, only ask for work, by way of subsidizing us with the sweat of our brow, what we want is to change the image of our Honduras”.

Inmates indicated that they not only speak for themselves, but on behalf of their families, so that everyone has opportunities and is not discriminated against.

“We want to apologize to society, we want peace with God and with the authorities.”

The M18 gang leaders were more cautious, but said their wish is that no more innocent people die.

They requested the presence of the government, and expressed their need to hear what the government has to say.   They emphasized that they “want to hear the Government, we do not want to listen to you (the media), because this is serious, everyone wants to live in peace.”

The leaders of the M18 complained that whenever there is a death, they say it was done by their gang, “we are always bad.”   Although they would not promise to end all crimes, bringing the crimes committed to “zero”, they said the violence will diminish. When asked about ending extortion, the gang leaders were cautious, and indicated that this is a dialogue.  They are asking for sources of employment, “if they listen, we can keep talking about answering your question”.

Hundreds of national and international journalists were at the San Pedro Sula prison to cover the announcement from Honduras gang members.

Yesterday,  Emiliani said that the peace process will be “slow and painful”, and that it will take at least two generations before citizens will experience real change.

* Adam Blackwell is Secretary for Multidimensional Security at the Organization of American States (OAS), and traveled to San Pedro Sula from El Salvador to support the peace process and participate in the dialogue with both gangs.