May 9, 2012 by Alma Castro Hernández No Comments 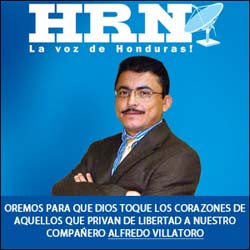 A former deputy inspector of the Honduras National Police was arrested today for his supposed link with the kidnapping of journalist Alfredo Villatoro Rivera, Press Coordinator for Radio HRN.

Ángel Alfredo Villatoro Rivera was kidnapped this morning in Tegucigalpa, at 4:50 am when he was heading to work at the HRN Radio Station. Mr. Villatoro Rivera and his vehicle were intercepted by six men in a grey Mazda truck and green Mitsubishi pickup (both without plates), close to a pharmacy in the capital of Honduras. After five hours, the kidnappers contacted his family.

The arrested former police officer, Jerson Basilio Godoy, was dismissed from his post in November, 2011 when it was ascertained that he belonged to a criminal gang dedicated to extortion and kidnapping. Today he was arrested and taken in for interrogation. The vehicle that the former policeman drove was found without plates and with a dent in the left side. It is suspected that is where he would have collided with the car of the Radio HRN employee.

Mr. Villatoro is from El Progreso, and works on the HRN Radio news program “Diario Matutino” with Juan Carlos Barahona.