The Mosquitia rain forests of Honduras and Nicaragua are, to put it mildly, thick jungle. As one travel guide notes, “While the edges of the Mosquitia can be reached by pickups driving along the beach, the vast majority of the region is accessible only by plane, boat, or foot, lending it the feel of a separate country, cut off from the rest of Honduras and the world.” 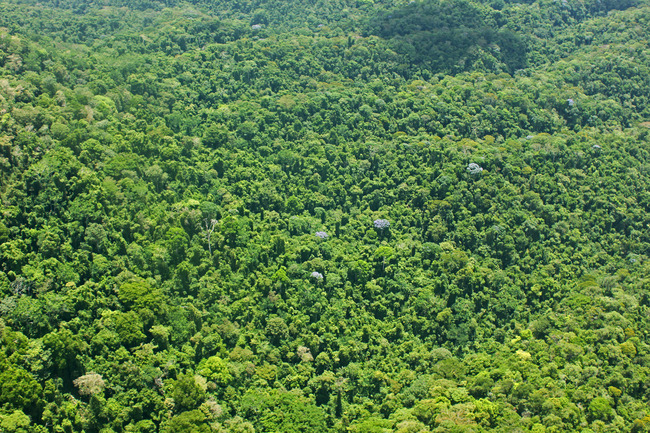 Is the fabled lost city of Honduras hiding beneath the dense jungle canopy? (UTL Productions, LLC)

The lushness of this biosphere — at 32,000 square miles, “the largest remaining expanse of virgin tropical jungle in Central America” — draws its share of adventurers and nature lovers each year, but that is not its most remarkable appeal. Over the past century, archaeologists have set their sights on that dense vegetation, hoping that beneath it they would find the ruins of Ciudad Blanca, a fabled ancient settlement seemingly swallowed by the Earth. In 1526, Spanish explorer Hernan Cortes wrote to emperor Charles V, relaying word of a purported province, deep in Honduras, that “will exceed Mexico in riches, and equal it in the largeness of its towns and villages.”

Today, at the American Geophysical Union’s meeting in Cancun, scientists have released images of what they believe to be that lost city, discovered not by machete-hacking their way through the jungle, but from above, in a tiny Cessna plane, the bottom of which had been cut open to make room for a million-dollarLIDAR machine, which can see through the forest canopy and map the topography below.

“This whole adventure for the last couple years has been quite a wild ride,” the expedition’s leader Steve Elkins told me on the phone from Cancun. “There were times I felt like if I didn’t find anything, everybody would say, ‘What a fool you are. You spent all this money, all this effort. There’s nothing there.'” But maybe, just maybe, they would get lucky, and the LIDAR would see something — walls, pyramids, symmetry, straight lines of any kind — that was at odds with the natural contours of the jungle floor. Something, maybe, like this, the first ever visual confirmation of a lost civilization in the Mosquitia forest: 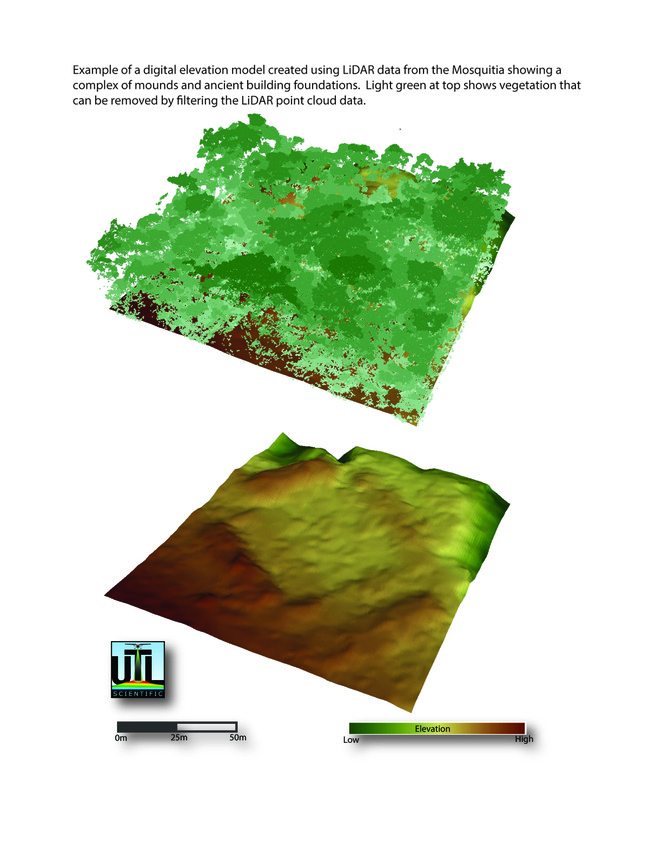 The New Yorker‘s Douglas Preston was lucky enough (and brave enough) to be on board during one of these mapping flights, over an area designated Target One (and referred to colloquially as T1), a valley where Jet Propulsion Laboratory scientists had noticed unnatural features in satellite data more than a decade ago. “But,” Preston writes in his May 6 New Yorker piece (*really* worth reading in full if you have access), “the images were blurry and ambiguous, and no ground expedition had been able to reach T1.” Elkins, who is a documentary filmmaker, told Preston, “There’s no record of anybody ever being in T1.” He continued, “Even the expeditions in the 1930s and ’40s went around it, because it was too hard.”

But LIDAR technology opens new possibilities for archaeologists. Jungle that was once impenetrable from below is now legible from above. The scale and speed of LIDAR-enabled research dwarfs older techniques.

“This technology is going to revolutionize archaeology,” archeologist Christopher Fisher of Colorado State University told me, also from Cancun. “We used to have to walk through the jungle, hacking our way through, recording every architectural feature, every trace of ancient habitation that we used to find. Incredibly labor intensive.”

Archaeology is on the cusp of a technological transformation. For more than a century, conducting work in the rain forest has been a sweaty, laborious business. When a potential site is identified, and before excavation can begin, it must be surveyed. Traditionally, this has required a team of researchers and assistants to comb and partially clear the forest, and then to mark, measure, and map every fixed, man-made feature, down to the smallest carved stone, while being tormented by mosquitoes, black flies, heat, and the persistent hazard of venomous snakes. Unlike a desert site, which can be mapped in weeks or days, a survey in the jungle can take years, even decades, and can cost hundreds of thousands of dollars. Many small features are overlooked, and even the most prominent structures can be surprisingly difficult to see. Years ago, at an unexcavated Maya site in the Yucatan, I stood barely 20 feet from the base of a large pyramid so heavily obscured by foliage that I couldn’t make it out.

Lidar has been used by geologists, urban planners, and civil engineers since the 1980s, but only recently has ti improved enough to be applied in fine grained archaeological mapping. Some archaeologists have employed other remote-sensing methods to survey sites, but in areas of dense forest those technologies yield Rorschach-like images that even experts cannot decipher. Now, with lidar, thousands of acres of dense jungle can be finely mapped in a few hours, with greater accuracy than the most painstaking ground survey can provide.

But even with such advanced technological capacity, it was entirely possible that Ciudad Blanca wasn’t out there to be found at all, a myth that grew out of the jungle’s mystery. “Every ten years or so, somebody finds it,” archaeologist Chris Begley wearily tells Preston. Was the LIDAR machine just another false hope? Michael Sartori, a mapping scientist at the National Center for Airborne Laser Mapping (NCALM), told Preston, “Steve Elkins is a film guy.” He continued, “Many times, I told my co-workers that this was a bad idea, that this is not the kind of project we should be doing. It just seemed like a crazy shot in the dark.”

Structure B, which the team hopes to investigate on the ground in the year ahead (UTL Productions, LLC)

At the very least, nobody in Preston’s story seems to have been particularly optimistic. One of the piece’s most striking anecdotes is the utter nonchalance with which the flight’s data were initially handled. The LIDAR operator hands Preston the two disk drives, for him to ferry to Sartori, who “would use software to strip away all the reflections from the vegetation, leaving only the ground points.” Sartori finished his task late at night and went to bed. The next day, he uploaded them to Ramesh Shrestha, director of the NCALM, who, not realizing what the images contained, forwarded them without even looking at them to William Carter, an NCALM LIDAR expert, who was on vacation. Carter told his wife he wanted to take a quick look before running an errand. “I don’t think it took me more than five minutes to see something that looked like a pyramid,” he told Preston. Archaeologists who doubted the team, not to mention the existence of Ciudad Blanca all together, were convinced within minutes of looking at the images.

Following the initial discovery, the team made additional passes over the jungle, covering yet more ground, a total of 55 square miles. “Instead of a lost city,” Preston writes, “we had found the expansive remains of an ancient civilization.” 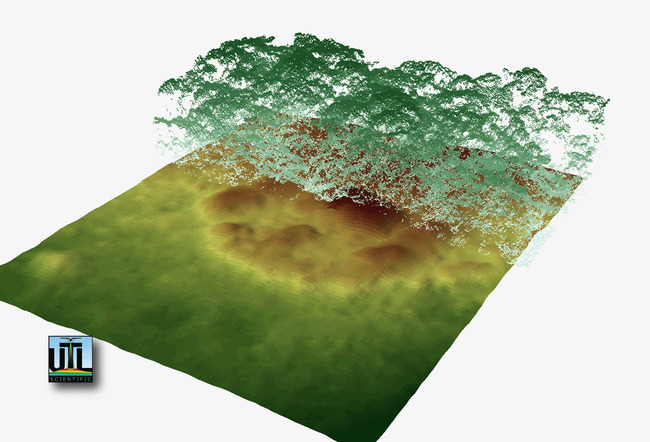 In some places, peeling back the layer of trees revealed symmetrical structures below. (UTL Productions, LLC)

Juan Carlos Fernández Díaz, who operated the LIDAR machine during the missions, told me that the first thing you think about, when you’re up above the jungle, is perhaps the most mundane: safety. But soon your mind starts to wander. “You have time to look out the window and just imagine how the landscape looks underneath the vegetation. So you keep your eyes open just in case you see something that is not right there, something anomalous. You cannot help going back in time and imagining what things were like 500 or 1,000 year ago.”

And those questions cannot always be answered from above. Plans are now underway for a ground mission to the sites starting in November, with the bulk happening in early 2014. “What happens with these things is that you find something and, you were just trying to answer a simple a question — was there stuff there? — and after you answer that question, instead of having one question, you have a thousand questions,” Fernández Díaz said.

“The better our technology gets, the more we’re going to be able to see into the past,” Colorado State geographer Stephen Leisz said to me. LIDAR may not be a time machine in the traditional sense, but these pictures released today show that, in another sense, it kind of is.

This could be one of the big breaks the country of Honduras has needed to jump start a much needed Tourism boost  as well as economic support. To all of the scientists, archaeologists and local guides who have assisted in this project, we extend our sincere gratitude, and hope to hear more positive discoveries from the team.