Honduras’s medical interns have been on strike for 45 days, demanding a doubled salary and improved working conditions, such as a rest area and private toilet. 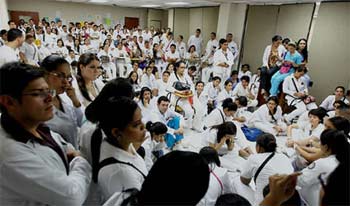 The UNAH Director, Julieta Castellanos, on Friday had informed students that those absent 50% of their scheduled time must repeat their internships. The spokesperson for the students, however, claimed they were willing to forgo any previous time served, “…provided that there is reform. We believe it is for the dignity of the medical interns who are so important for our country. Until now, the role of the intern has been denigrated, and we need a precedent to change this and improve the training of doctors because ultimately it will benefit the patients of Honduras.”

Doctor Arturo Bendaña, the Honduran Minister of Health, announced Sunday night that medical interns are returning to their jobs, after an agreement was signed with the authorities of the UNAH (National Autonomous University of Honduras) and the Secretary of State.

“During the day they are to be reintegrated. In the morning we will have a meeting to inform them of the hospitals to which they will be assigned,” announced Dr. Bendañda.