Honduras Over the Weekend

Would you like to gain a bit of a glimpse into what happened throughout the country, over the weekend? Well if so, you’re in luck!

On Friday a medical brigade set up shop in San Pedro Sula’s central park. It worked for free and treated some 300 residents of the city, before leaving six hours later. The group which organized the event, wants to do it again in the future. 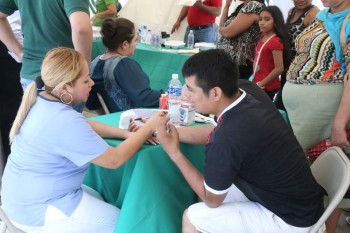 A photo taken at the medical brigade.

David Romero’s trial happened. He was sentenced to 8 years and 4 months in prison. Romero is largely credited for being one of the individuals who worked to get the Honduran government to investigate the missing funds from the Honduran Institute of Social Security.

The National Electrical Company did work throughout the country, such as moving certain power-lines which resulted in some temporary outages.

The ministry of education is reacting to numerous complaints from parents all over the country, and especially in San Pedro Sula and Districto Central, about a series of announcements from principals which establish a cost for graduation which is higher than the maximum the ministry said, which was 160 lempiras.

Photo of Selma Silva, from the La Prensa article talking about the complaints about the cost of graduation

Honduran authorities have continued to be more offensive against the Rivera Maradiaga family, seizing more and more of their property, with seizures occurring in some small communities, today, yesterday, and Friday.

Some Honduran media outlets are talking about how the secretary of health recently announced that there have been deaths related to Dengue. El Heraldo reported that there were 3.

Departmental police and Fusina managed to capture individuals transporting some 25 kilos of cocaine in Gracias a Dios.

An earthquake occurred in the seas between Honduras and the Cayman Islands, just hours ago, with a 5.8 magnitude.

*The sources for this are taken from a variety of sources, including La Prensa, El Heraldo, La Tribuna, and various English news-sources. If you have any questions feel free to comment down below!*