Honduras is emerging as Central America’s solar success story, thanks to an ahead-of-the-curve incentive plan that has brought foreign investment to the sector, anchored by guaranteed 20-year contracts with state utility ENEE.

Regulatory clarity and incentives for investors have set the country apart from its neighbors El Salvador and Nicaragua, where a lack of clear rules and price stability are hindering solar development.

Solar growth in Honduras has been fast, with the country’s first large-scale PV project — the 144-megawatt Nacaome park operated by Compañía Hondureña de Energía Solar and Solar Power — having only initiated operations in May.

But the sudden growth spurt is the result of a decade-long push by the government to open up generation and distribution to foreign investment and diversify the country’s energy mix, long dominated by thermal and hydroelectric.

In 2007 Honduras enacted a law to promote renewable energy generation, with 20-year income tax breaks and a waiving of import tariffs on renewables components, while also requiring ENEE to enter into 20-year PPAs with renewable energy firms.

And in 2013 the government launched its premium tariff of $155 per megawatt-hour for the first 300 megawatts of PV capacity brought on-line by July 31 of this year.

Since then, CRIE has approved more than 600 megawatts of solar projects.

“The incentive created a ‘first come, first served’ basis that set the horses galloping. I think it was a strategy that was a little risky, but it worked,” Aguilar said.

There was strong development of renewables early on, but solar stagnated. The 2013 reforms, explained Aguilar, were designed specifically to “exploit the country’s excellent solar potential” through targeted incentives, which have leveraged more than $1 billion in investments for the PV industry.

SunEdison is the biggest company operating in Honduras so far, having built three solar projects totaling 81.7 megawatts that came on-line in July, funded by a $146 million non-recourse debt arrangement with the International Finance Corporation, the Central American Bank for Economic Integration and the OPEC Fund for International Development. 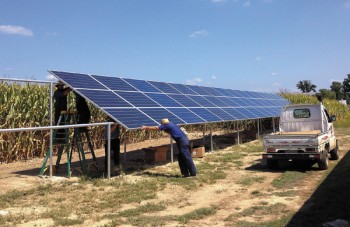 The complex features the two 23.3-megawatt Pacífico and Choluteca I plants, as well as the 35.1-megawatt Choluteca II.

Six other projects are under construction in the region and neighboring department Valle, totaling 250 megawatts, all of which are slated to come on-line this year.

“Solar energy will play an increasingly important role in Honduras as the country strives to reduce its dependency on imported fuels,” said Carlos Barrera, SunEdison’s vice president and managing director.

He said the company sees an opportunity to help Honduras meet its renewable energy goal of generating 80 percent of its energy from renewables by 2020.

“The acquisition will solidify SunEdison’s position as the largest renewable energy developer in Central America as it expands its presence in the global renewable energy market,” the company said at the time. 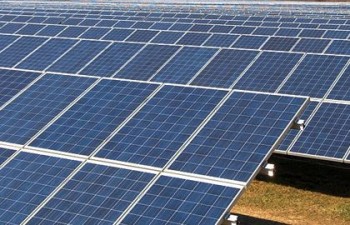 Another global player in the country is China’s Yingli Green Energy, which will supply solar panels to a 50-megawatt complex in Nacaome being developed by EM-Power Corporación, as well as for two projects under development by Sybac Solar, plus the La Manzanilla and Las Lajas projects being developed by Energys de Honduras.

BLP’s Aguilar is confident that investment and M&A in solar in Honduras will continue, evidenced by the Costa Rican law firm’s new office in Tegucigalpa.

“There will likely be more mergers and transactions in the energy sector,” she said. “It has been a surprise to see global firms such as SunEdison entering Honduras, and [that company] is perhaps more optimistic about its Honduras operations than those in other countries.”

Aguilar also dismissed fears that insecurity, often cited as an impediment to investment in Honduras given the capital city’s high crime rate, would deter investors.

“The great advantage is that all PPAs are approved by congress and become law, offering greater legal certainty to investors, while the reform has also promoted self-supply, and people’s attitude toward solar has begun to change,” she said.