Honduras Police along with US DEA Have Captured Dangerous Drug Lords

Honduras elite police for the “TIGRES” along with the USA DEA have arrested two leaders of a major Central American drug gang responsible for transporting cocaine into the United States, the national police said on Sunday.

Brothers Miguel Arnulfo and Luis Alonso Valle Valle were detained in a police operation in the country’s eastern Copan state, near the border with Guatemala, police chief Ramon Sabillon told reporters in the capital.

The brothers are wanted on drug charges by the U.S. government, which may seek their extradition.

In August, the U.S. Office of Foreign Assets Control, part of the Treasury Department, placed the Los Valles gang on its list of major drug traffickers and described their organization as one of the top drug gangs in Central America.

Drug-related violence in Honduras has increased in recent years since Mexico’s drug cartels expanded into the country, enlisting local street gangs and using the country’s Caribbean coast to transport South American cocaine to the United States.

The OFAC described Miguel Arnulfo Valle Valle as the leader of the gang, which it said is responsible for violence and corrupting public officials as well as distributing tens of thousands of kilograms of cocaine per month to the United States. 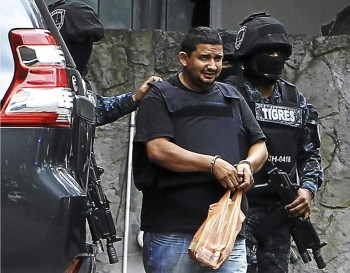