Honduras President Porfirio Lobo Sosa was received with honors in Columbia at the Plaza of Ayacucho this past Friday afternoon.

President Lobo visited with the South American country’s President for two hours to review the bilateral agenda of cooperation regarding the combating of drug trafficking and organized crime, as well as furthering industrial and agricultural cooperation between Honduras and Columbia. President Lobo and President Juan Manuel Santos Calderón were joined by the Honduras Minister of Security, Pompeyo Bonilla, the Columbian Chancellor, María Ángela Holguín, and later in the day, Costa Rica’s President, Laura Chinchilla. The meeting was held at the Colombian Presidential Palace

President Lobo Sosa thanked Columbia for the support it has provided to Honduras in fighting drug trafficking, which has increased the Honduran government’s effectiveness in the war waged against organized crime.

“It is a strong and difficult struggle, but with the support of friendly governments such as Colombia, we will move forward. We continue to count on their support, and the government of Colombia, to win this battle and rid our people of this problem,” said Lobo.

Columbia’s President Santos proclaimed that where there is a tentacle of organized crime and drug trafficking, Columbia will be there to support the defeat of this evil, which leads only to the pain of the population.

“We will continue the effective work. Thank you, President Lobo and President Chinchilla, for having confidence in our support. We will not leave you alone, in us, you have a permanent friend,” he said.

President Lobo and his entourage were in Columbia for the day, and arrived back in Tegucigalpa Friday evening. 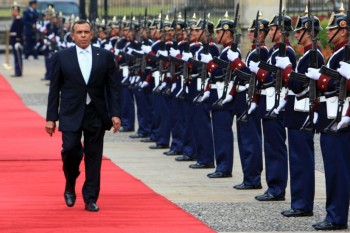