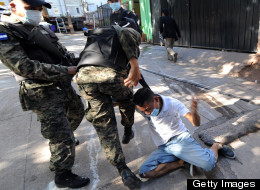 TEGUCIGALPA, Honduras — Hundreds of relatives of inmates who burned or suffocated to death when a fire raged through a Honduran prison forced their way into a morgue Monday to demand the remains of loved ones.

The group of women and some men pushed into the morgue, broke into a refrigerated container and opened at least six body bags, prosecutors spokesman Melvin Duarte said.

Police used tear gas to chase the people from the morgue, Duarte said. He said no one was injured during the confrontation in Tegucigalpa, although at least one woman fainted.

The fire in a crowded prison last week in the city of Comayagua killed at least 359 prisoners. There were 852 inmates at the prison built to hold less than half that.

Duarte said the crowd got upset after seeing some bodies being laid on the street and then people burst into the morgue.

“The bodies were about to be loaded onto a truck to be transferred to the medical school to continue with the process of identification,” Duarte said.

Hundreds of people have been waiting outside the morgue for their relatives’ remains since the fire a week ago. A team of forensic doctors from across Latin America has identified 32 bodies so far. Of those, 16 have been turned over to their families.