President Pepe Lobo, as part of the Council of Ministers meeting held at the Presidential Palace, received the best copolymer fishing line and a replica of the medal “Margarita Lizarraga” on behalf of Honduras yesterday, for the promotion of responsible fishing in the country.  The head of the Ministry of Agriculture and Livestock (SAG), Jacobo Regalado, also participated in the ceremony.

This recognition, given to the Government through the Ministry of Agriculture and Livestock (SAG), was delivered by the Acting Representative of the FAO in Honduras, Cristian Munduate and the SICA/OPESCA CEO, Mariano González Recinos.

The award is a tribute to the late Mexican doctor, Dr. Margarita Saucedo Lizarraga, who dedicated her life to promoting the responsible use of valuable fishery resources. The medal is an acknowledgment that FAO presents to individuals or leading institutions in the world to promote the Code of Conduct for Responsible Fisheries.

The award also recognizes the management that SAG provided in the implementation of the Integration Policy for Fisheries and Aquaculture in Central America.

SAG has significantly, among other issues, promoted in Honduras and Central America, aquaculture, the new innovative technologies used for fish culture, control of illegal, unreported, and unregulated fishing, the promotion of programs for fishing, and the new Law on Fisheries and Aquaculture in harmony with Central American laws.

In that sense, OSPESCA’s Mariano González Recinos said that this is a recognition of the tremendous efforts made by the Honduran Government through SAG, on the issue of responsible management of fishing in Honduran waters.

He noted that Honduras has promoted a new aquaculture in Central America, through their attention to other marine species that have a high commercial value, but that can be grown throughout the region; for example, the baby octopus in the Gulf of Fonseca.

It was announced that on August 14, 2013, a new opinion of the Fisheries Act will be signed into law in the National Congress, with the expectation that it is the most modern in Central America.

He emphasized, however, that fishing through diving affects the health of the people performing this activity, so he reminded everyone that there is an agreement between the Ministers of Agriculture of the region to suspend the practice. Agriculture holders in Honduras and Nicaragua have signed this agreement to not perform fishing by diving. 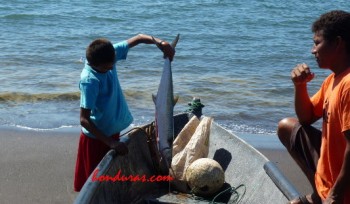 González Recinos stressed that in Central America there has been a significant change in the work of fishing as a whole, as according to FAO records, the 92,000 artisanal fishermen has increased in number to 150,000. He added that sport fishing is gaining momentum, particularly as aquaculture has grown from 28,000 to 65,000 hectares in Central America.

The interim representative of the FAO in Honduras, Cristian Munduate, said that, “for the multilateral organization, it is a great honor to deliver to the Government of Honduras, under the great leadership of President Pepe Lobo, the recognition of the progress that has been made regarding the Code of Ethics of Fishing”.

Mundate explained that in this Central American country, the medal is given for the fight for responsible fisheries management. “Thank you, Mr. President for the huge commitment you have to the country’s development,” he expressed.

For his part, President Pepe Lobo said that, “It is a high honor to receive this recognition on the part of the FAO, which is already the second we have received, one in Rome for improved levels of nutrition in children, and the other on the issue of responsibility in fishing activities”.

The President added that this is a very important initiative for the region, because OPESCA, an organ of SICA, has improved the management of fisheries in Central America.  He said that the government should make it easier for fishermen, mainly the Gulf of Fonseca, with the option to raise new marine species, as revenue has decreased in traditional fishing.

“Thank you for this recognition that the FAO has given us; that I receive on behalf of the Honduran people,” said President Porfirio Lobo Sosa of Honduras.